As a special treat for Christmas, I've posted the Beatles Christmas Messages recordings.
Below are details on each of the recordings and their audio to enjoy. These bring back fond memories. 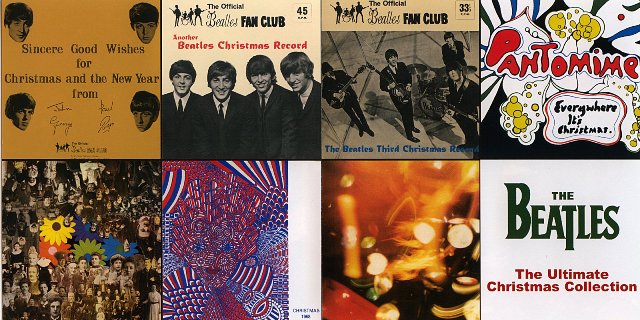 Each year from 1963 through 1969, the Beatles recorded a special Christmas greeting for their fans. The Official Beatles Fan Club in England sent flexi-discs containing the Christmas messages to its members each holiday season.The American fan club, Beatles (U.S.A.) Ltd., was established in 1964, and for their first Christmas, the American fan club sent fans the 1963 Christmas message on a soundcard, which is like a flexi-disc, but is "printed" on the post card that is mailed. No message was sent to the American fans in 1965 because the tape was not received on time.[Read more →] The Beatles Christmas flexis are very rare, and sell, in excellent condition, anywhere from $200 to $500.


These recordings offer a unique time-capsule glimpse into the personalities and evolution of the Beatles from 1963 through 1969. In the early years, like their appearances in A Hard Day’s Night, even though these messages were scripted by “somebody’s bad hand-wroter” (their Press Agent Tony Barrow), the Beatle’s geniune wit and humor shines through, for example, in 1963, when as John mentions taking part in the Royal Variety show, the boys extemporaneously launch into a whistling version of God Save The Queen, or in 1964, when Paul mentions that they don’t really know where they’d be without the fans, John says, off-handedly, “In the Army, perhaps…”


For older Beatles fans who remember hearing these messages over the years, “these little bits of plastic” are a fond holiday tradition, while for younger Beatles fans they offer a whole new insight into a pop music phenomenon which might never be repeated.


We present the Beatles Christmas Records here as a Christmas present to you from the Internet Beatles Album. Happy Crimble!

1963
The Beatles Christmas Record
Released December 6, 1963
Recorded October 17, 1963
EMI Abbey Road Studio 2
Engineer: Norman Smith
Recorded after a session for I Want To Hold Your Hand and This Boy.
About 30,000 total copies were manufactured.
This recording was sent to US Fan Club members in 1964.

1964
Another Beatles Christmas Record
Released December 18, 1964
Recorded October 26, 1964
EMI Abbey Road Studio 2
Engineer: Norman Smith
The only Beatles Fan Club Christmas record that played at 45 RPM instead of 33 1/3 RPM.
Recorded on the same day that they recorded Honey Don’t for Beatles For Sale.
US Fan Club members received the 1963 Christmas message this year.

1965
The Beatles Third Christmas Record
Released December 17, 1965
Recorded November 8, 1965
EMI Abbey Road Studio 2
Engineer: Norman Smith
Recorded during the Rubber Soul sessions, on the same day they recorded Think For Yourself. Cover photo taken on November 1 during the taping of Granada-TV’s ‘The Music of Lennon and McCartney’.


Some of the historical info on this page is from the books The Beatles: A Day In The Life by Tom Schultheiss, The Beatles Day By Day by Mark Lewisohn and The Price Guide for the Beatles American Records by Perry Cox and Frank Daniels As the 60’s evolve, so do the Beatles, and so do their Christmas records.


The previous year, the Christmas message changed from scripted messages talking directly to the fans, to sketch comedy, mostly Paul’s idea, but enthusiastically joined in by the other three. 1967 brings a similar production, but as the members of the group start desiring to go their separate ways, this is also reflected in the Christmas records, as the final two years bring messages recorded in bits and pieces recorded separately by each Beatle and assembled together later.

The script was written earlier in the day by the band. Last Christmas record the Beatles recorded together as a group. Cover designed on November 29 by John and Ringo.

The song Christmas Time (Is Here Again) was later released on the Real Love single in 1995.

1968
Happy Christmas
Released December 20, 1968
Recorded in November, 1968 at John’s home in London, Paul’s home in London, in the back of Ringo’s van in Surrey, with George in America and at George’s house in Esher during rehearsals for the White Album.
Special guest: Tiny Tim.

Created by Radio 1 disc jockey Kenny Everett who edited together separately-recorded messages from John, Paul, George and Ringo, and inter-cut random fragments from the White Album.

Because the Beatles officially broke up in 1970, no Christmas message was prepared for that holiday season.


In early 1971, fan club members were sent an album on the Apple label containing all seven of the Christmas messages.
Pictured is the American version of the LP. The British LP entitled From Then To You included a reproduction of the cover of the 1963 Christmas record.


Along with Let It Be and Introducing The Beatles, this is one of the notoriously most heavily counterfeited of Beatles albums. Counterfeits can be identified by blurry cover photos and an indentation ring much larger than 1 1/2″.

Some of the historical info on this page is from the books The Beatles: A Day In The Life by Tom Schultheiss, The Beatles Day By Day by Mark Lewisohn and The Price Guide for the Beatles American Records by Perry Cox and Frank Daniels.


You can listen to them all here:
http://www.beatlesagain.com/beatles-christmas-records.html


Below is my previous post of scans of the covers:
http://jfnmusicmemories.blogspot.com/2009/07/christmas-messages-covers.html

You can get the recordings here:
http://teenagedogsintrouble.blogspot.com/2009/12/very-merry-beatles-christmas.html