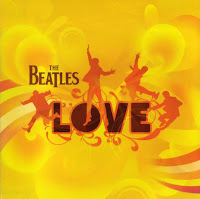 George Martin and his son Giles began work on Love after getting permission from Paul McCartney, Ringo Starr, Yoko Ono, and Olivia Harrison (the latter two representing John Lennon and George Harrison, respectively). In discussing the project, Giles Martin noted that elements were utilized from recordings in The Beatles catalogue, "the original four tracks, eight tracks and two tracks and used this palette of sounds and music to create a soundbed." George Martin also promised a prize to those who could crack a "code" found in the album.

Giles Martin said in an interview that he was afraid they wouldn't get the green light to do the project, so he started by making digital back-ups of the original multi-track recordings just to get started on the project. He also said that he and his father mixed more music than was eventually released, including "She's Leaving Home" and a version of "Girl" that he was particularly fond of. 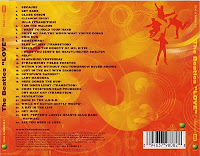 McCartney and Starr, the two living members of The Beatles after the release of "Love", responded very positively to the album. McCartney noted that "This album puts The Beatles back together again, because suddenly there's John and George with me and Ringo". Starr commended George and Giles Martin for the album and said that the album is "really powerful for me and I even heard things I'd forgotten we'd recorded."

The album was first played publicly on Virgin Radio's The Geoff Show. Virgin Radio DJ Geoff Lloyd, a self-proclaimed fan of The Beatles, chose to play the entire album uninterrupted to allow younger fans to experience an album premiere. 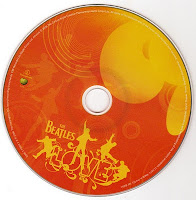 Love placed at #3 in the UK Albums Chart during its first week of release, trailing Westlife's The Love Album and Oasis' Stop the Clocks compilation. It was also successful in the United States, debuting at #4 in the Billboard 200, where it was certified Platinum in late 2006.

Love contains elements from 130 individual recordings of The Beatles. While a complete list has not been disclosed, highlights of how the elements were mixed have been noted by the press.

* "Because" – An interview in Entertainment Weekly revealed that the opening track includes the bird sounds used in the World Wildlife Fund version of "Across the Universe".In addition, a new recording of a Wood Pigeon was implemented "to make it more British," according to George Martin.
* "Get Back" – As reported, the track utilizes the opening guitar from "A Hard Day's Night", the drum and guitar solos from "The End", percussion from "Sgt. Pepper's Lonely Hearts Club Band (Reprise)", and the orchestral swell from "A Day in the Life".
* "I Want to Hold Your Hand" – An interview with George and Giles Martin stated that elements from both the studio recording and the Hollywood Bowl live performance were mixed to create this version.
* "Drive My Car"/"The Word"/"What You're Doing" – As reported, the medley features the guitar solo from "Taxman" and the horns section from "Savoy Truffle".
* "Gnik Nus" – As suggested in its title, the track contains the vocal arrangement of "Sun King" played in reverse.
* "Something" (with "Blue Jay Way" transition) – The track contains vocal elements from "Nowhere Man".
* "Strawberry Fields Forever" – A review of the album noted that this version builds from an acoustic demo. It includes the orchestral section from "Sgt. Pepper's Lonely Hearts Club Band", the solo piano from "In My Life", the brass included in "Penny Lane", the cello and harpsicord arrangement from "Piggies" and the coda of "Hello, Goodbye".
* "Within You Without You"/"Tomorrow Never Knows" – This track combines the vocals from "Within You Without You" with the bass and drums from "Tomorrow Never Knows."
* "Octopus's Garden" – According to USA Today and PopMatters, this track contains the string arrangement from "Good Night", sound effects used in "Yellow Submarine" and elements from "Lovely Rita" and "Helter Skelter".
* "Lady Madonna" – The song includes the guitar riff from "Hey Bulldog", Eric Clapton's guitar solo from "While My Guitar Gently Weeps" and Billy Preston's organ solo from "I Want You (She's So Heavy)".
* "Here Comes the Sun" (with "The Inner Light" transition) – As mentioned by Giles Martin, the track includes backing vocals from "Oh! Darling" and a bass line from "I Want You (She's So Heavy)".
* "While My Guitar Gently Weeps" – A BBC article reported that George Martin chose to use an early version of the recording for the album and wrote a new orchestral backing for the track. This was also stated in the fifth chapter of The Beatles 'LOVE' Podcast
From: wikipedia.

There is also a version of the album released on 2 discs: a DVD in DTS 5.1 channel surround sound and the regular audio CD. This represents the 2nd surround sound release for the Beatles catalog. The first was the remastered Yellow Submarine. 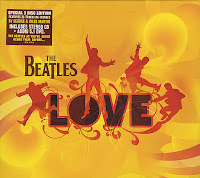