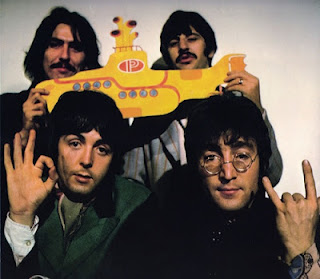 Once upon a time… or maybe twice, there was an unearthly paradise called Pepperland, a place where happiness and music reigned supreme. But all that was threatened when the terrible Blue Meanies declared war and sent in their army led by a menacing Flying Glove to destroy all that was good.  Enter John, Paul, George and Ringo to save the day!  Armed with little more than their humour, songs, and of course, their yellow submarine, The Beatles tackle the rough seas ahead in an effort to bring down the evil forces of bluedom.
Yellow Submarine, based upon a song by John Lennon and Paul McCartney, is a fantastic tale brimming with peace, love, and hope, propelled by Beatles songs, including “Eleanor Rigby,” “When I’m Sixty-Four,” “Lucy in the Sky With Diamonds,” “All You Need Is Love,” and “It’s All Too Much.” When the film debuted in 1968, it was instantly recognized as a landmark achievement, revolutionizing a genre by integrating the freestyle approach of the era with innovative animation techniques.
John Lasseter (Chief Creative Officer, Walt Disney and Pixar Animation Studios) writes, “As a fan of animation and as a filmmaker, I tip my hat to the artists of Yellow Submarine, whose revolutionary work helped pave the way for the fantastically diverse world of animation that we all enjoy today.”
Currently out of print, the film has been restored in 4K digital resolution for the first time by Paul Rutan Jr. and his team of specialists at Triage Motion Pictures and Eque Inc. Due to the delicate nature of the hand-drawn original artwork, no automated software was used in the digital clean-up of the film’s restored photochemical elements. This was all done by hand, frame by frame.
The film was directed by George Dunning and written by Lee Minoff, Al Brodax, Jack Mendelsohn and Erich Segal.  Source: http://www.yellowsubmarinethemovie.com/

The Beatles’ classic 1968 animated film Yellow Submarine has been painstakingly re-mastered, by hand, for a new DVD/Blu-Ray reissue.
Set to be released on May 28th, the film was meticulously dealt with by a team of specialized experts. They worked on each frame individually by hand rather than using modern editing software, honoring the original film’s delicate hand-drawn composition.
Needless to say, that’s pretty impressive, and fans will likely be delighted once the DVD/Blu-Ray is released.
As Billboard details, the release will come with a ton of bonus material:


“The DVD and Blu-ray releases will feature bonus material including a making-of documentary, the original theatrical trailer, audio commentary, interviews, behind-the-scenes photos and more. Each edition comes packaged with reproductions of animation cels from the film, collectible stickers and a 16-page essay by Walt Disney/Pixar Chief Creative Officer John Lasseter.”

The original Yellow Submarine film’s creation was quite an accomplishment in itself, taking almost two years and 40 animators to create the final product. It’s a testament to the Beatles, their music, their fans, and the filmmakers themselves that this re-release has been such a process. It probably could have easily been re-vamped using traditional contemporary editing software, but that would strip away some of its appeal.
It goes without saying that this upcoming Yellow Submarine re-issue should be a must-buy for all Beatles fans, as it sounds really special.