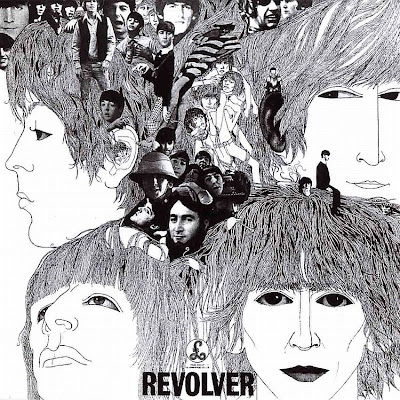 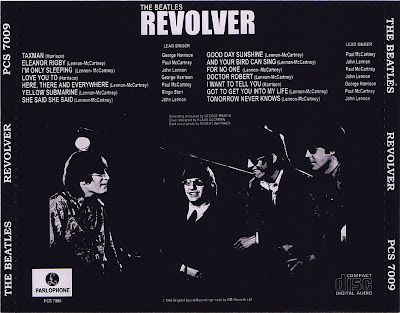 The Beatles chose Revolver as this album's title from other candidates such as Abracadabra, Magic Circles, and Beatles on Safari. The cover slick was designed by Beatle acquaintance and musician Klaus Voorman.

By the summer of 1966, the Beatles were changed men. Having embraced the emerging hippy ethic, taken LSD, and developed personal musical tastes that ranged from classical to Indian to the avant-garde, it was almost inevitable that Revolver would reflect these new interests, just as their debut album had reflected their youthful love of American rock and soul. Clearly a studio creation rather than just a collection of songs, this was the album on which the Beatles' songwriting skills were most perfectly enhanced by their desire to innovate. Released on August 5, Revolver topped the U.K. album charts for seven weeks starting on the 13th and, like With the Beatles, even made an appearance in the Top 20 singles.

Paul McCartney: Just to show how wrong one can be, I was in Germany on tour just before Revolver came out. I started listening to the album, and I got really down because I thought the whole thing was out of tune. Everyone had to reassure me that it was OK.

Although Revolver was released during the Beatles' final tour, the group played none of its songs on stage. It was the last instance where UK and US versions of a same-titled Beatle album contained a different track list.

Side 2
1. Good Day Sunshine
2. And Your Bird Can Sing
3. For No One
4. Doctor Robert
5. I Want To Tell You
6. Got To Get You Into My Life
7. Tomorrow Never Knows
Posted by the original PC Music & TechnoGeek at 2:43 PM
Labels: Beatles - Revolver 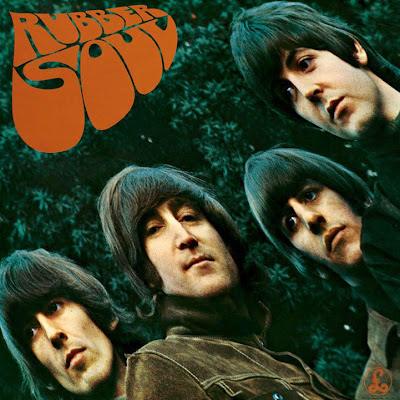 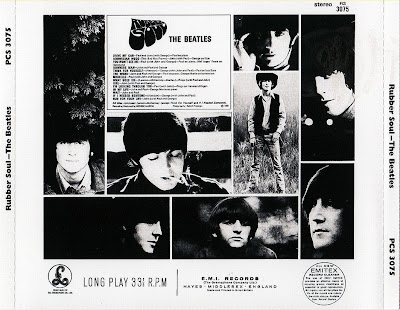 George Martin commented, "[Rubber Soul] was the first album to present a new, growing Beatles to the world. For the first time we began to think of albums as art on their own — as complete entities." The unusual album title has never been thoroughly explained.

The song Wait was recorded during the Help! sessions. All other songs were recorded in October and November, 1965.

An early Beatles high-water mark, Rubber Soul was written under severe pressure. When recording started on October 12, the band had very little material, and in order to catch the Christmas market, they had to write the songs and record them in just under a month. Adding to the tension, the onset of creative friction between Harrison and McCartney led to the bassist assuming lead guitar duties on some tracks. Paul's loss of faith in George may also explain why keyboard instruments, including piano, harmonium, and Hammond organ, play a greater role in the arrangements. Despite all this, Rubber Soul is a gem. In America, it sold 1.2 million copies within nine days of release, and after charting at No. 1 in the U.K. on December 8, it held off all comers for 12 weeks.

John Lennon: We were just getting better, technically and musically, that's all.... In the early days we had to take what we were given, we didn't know how you can get more bass. We were learning the technique on Rubber Soul. We were more precise about making the album, that's all, and we took over the cover and everything. That was Paul's title, it was like "Yer Blues," I suppose, meaning English soul.

Robert Freeman took the photograph for the cover slick in the garden of John's house in Weybridge. He later wrote, "The distorted effect in the photo was a reflection of the changing shape of their lives". 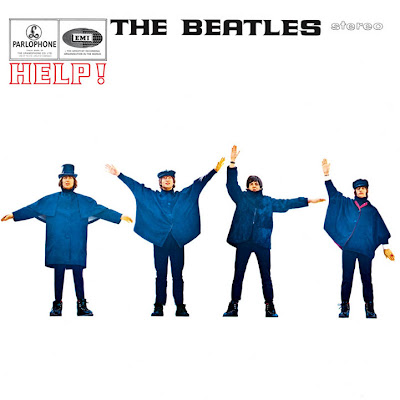 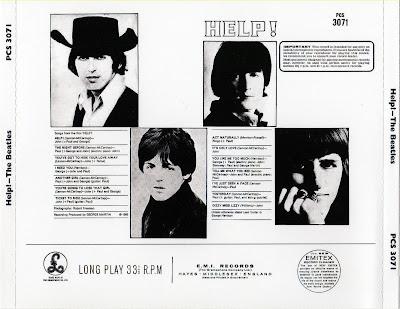 The Beatles' second move Help! was filmed between February 23 and May 11, 1965 and released in London July 29. Originally titled Eight Arms To Hold You, the action/adventure spoof centers around Ringo who gets a sacrificial ring (owned by an odd sect named the Kahili) stuck on his finger. The Beatles are chased around the world by the Kahili who want to kill Ringo while Foot and Algernon, a pair of mad scientists, try to steal the ring for themselves.

Unlike A Hard Day's Night, Help! was filmed in color. George commented, "In color ... Yeah, wow, see? They had more money for that one!"

The Beatles' second movie-related album, Help!, was recorded in two batches. The songs that appeared in the film were done in February, immediately before the film was shot, while the remaining tracks were laid down in mid-June. The album, including McCartney's best-loved composition, "Yesterday," incorporates elements of the prevailing folk-rock style, with the Lennon tracks in particular revealing the impact of Bob Dylan. It was released on August 6, 1965, entering the U.K. chart at No. 1 a week later.

John Lennon: Help! was where we turned on to pot and dropped drink, simple as that.

The Parlophone version of Help! included all the songs from the film on side one and new, unreleased Beatle songs on side two.

Photographer Robert Freeman wrote, "For the design of the album cover I had the Beatles signaling in semaphore the word HELP." Well ... not exactly. George signals an "N" or maybe and "R", John a "U", Paul a "J", and Ringo a "D" or "V". It's been suggested some of the images are reversed and out of order. If so, Paul signals an "H" and Ringo an "L". Closer to HELP but George's "N" or "R" and John's "U" remained unchanged. 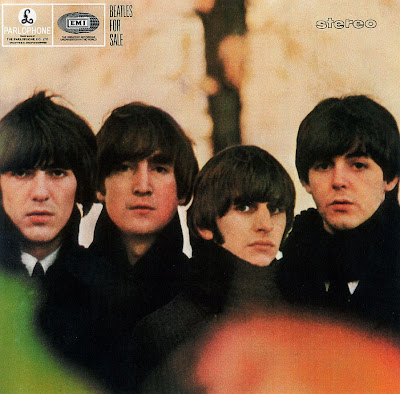 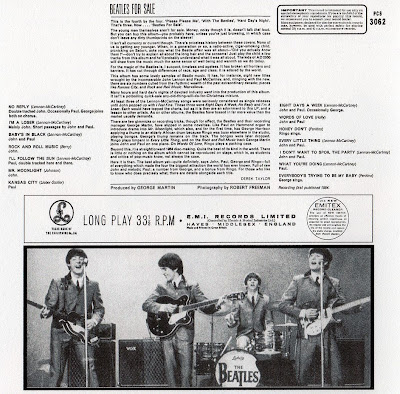 1964 was one long, hard slog for the Beatles, and by August 11, when they started taping their second album of the year, they were worn out from constant touring, filming, and recording. And it showed. Under pressure to have new product in the shops in time for the Christmas gift bonanza, they turned in an inconsistent effort, falling back again on a clutch of cover versions to disguise a dearth of new material. Nevertheless, in the United Kingdom Beatles for Sale sold over a million copies in its first week. Five days after its December 4 release, it dislodged their own A Hard Day's Night from the U.K. No. 1 slot, where it remained for nine weeks.

Paul McCartney: John would often have the melody and the lyrics to one verse, and the trickiest thing is making more of it...that was often where he or I needed help.

The gatefold also featured Freeman's photographs. On the left is a shot of the Beatles' February 11 performance at the Coliseum in Washington D.C. On the right, the Beatles stand in front of a mural in the lobby of London's Twickenham Film Studios during the filming of A Hard Day's Night. 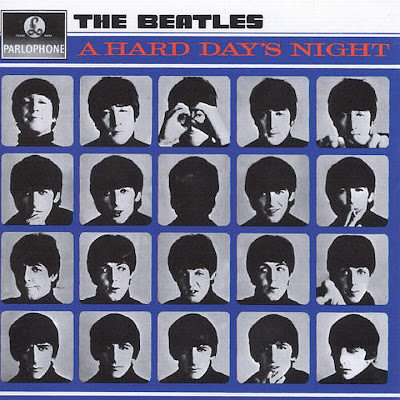 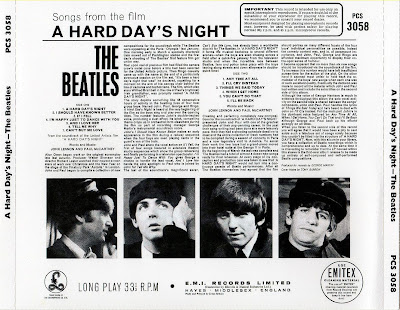 United Artists, an American film company, produced A Hard Day's Night. The movie was released in Britain July 6, 1964, and it marked the Beatles' acting and film debut. Shot between March 2 and April 24, the movie follows the Beatles through a day of Beatlemania and ends with a live television performance.

After having conquered America, the Beatles settled down to record the songs they'd written mostly under seige conditions in New York and Paris, intended as the soundtrack for their movie debut. A Hard Day's Night was their first album to include only material written by the group, with Lennon in a prolific phase generating the bulk of the songs. Released on July 10, 1964, it moved 1.5 million copies in nine days to become the fastest-selling album in U.K. history. It reached No. 1 on July 30 in the U.S. and U.K. simultaneously, racking up an impressive 21 weeks on top on their home turf.

Paul McCartney: John would be knocking off "I Should Have Known Better" on his own, and I'd also be doing the same. We finished it all pretty quickly and soon had more than enough songs. It wasn't like we were writing a soundtrack, we were just writing Beatle songs that happened to be a soundtrack.

The film's working title was Beatlemania #1. As the story goes, the eventual title was a result of one of Ringo’s often peculiar expressions ... After a particularly difficult day, he said, "It's been a hard day..." and realizing it was already nighttime, added, "...'s night." Producer Walter Shenson asked John and Paul to write a song titled A Hard Day's Night to play over the opening sequence, which had already been filmed.

The LP included all the songs from the film on side one and new Beatle songs on side two.

Beatles - With The Beatles 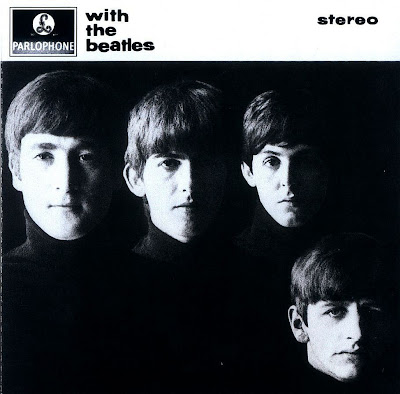 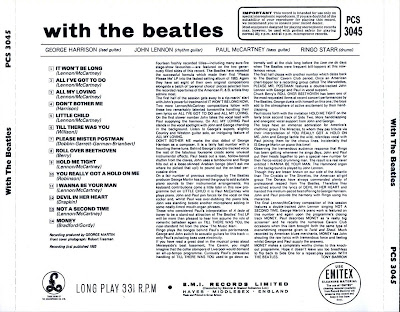 Beatles - With The Beatles

The Beatles began recording their second album on July 18, 1963, their new-found success granting them the luxury of having more than one day to do so. With the Beatles was the first album on which they were able to experiment with the new technology of double-tracking.

Released on November 22 with advance orders of 270,000, it dislodged Please Please Me from the top of the U.K. album chart, and it became the first pop album to sell over one million copies. It was at the top of the charts for 21 weeks.

Brian Epstein hired freelance photographer Robert Freeman to shoot the sleeve picture. The famous black and white image was taken in the dining room of the hotel where the Beatles were staying.

The first pressing of With the Beatles incorrectly listed You've Really Got a Hold On Me as You Really 'Gotta' Hold On Me. 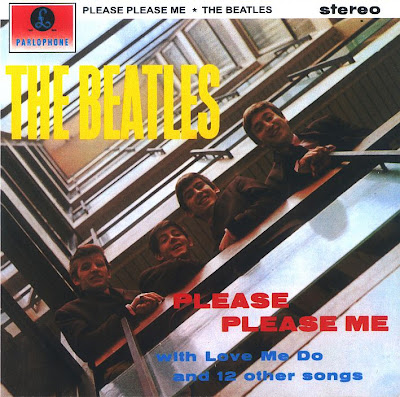 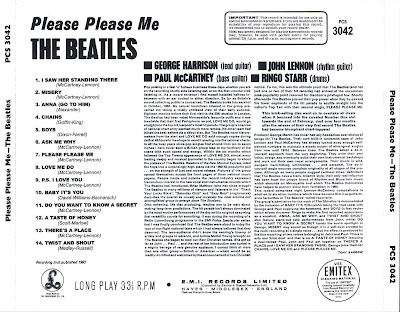 The first steps on the road to Please Please Me were taken on June 6, 1962, when the Beatles, already successful in their native Liverpool, auditioned for EMI Records producer George Martin at Abbey Road studios in London. Martin was sufficiently impressed to have them back September 11, when they recorded their debut single, "Love Me Do," with session drummer Andy White standing in for Ringo. "Love Me Do" and their second single, "Please Please Me," did well enough for Martin to greenlight the recording of a full album. It took a mere nine hours on February 11, 1963, on a two-track tape machine, at a cost of £400.

Released on March 22, it hit the U.K. No. 1 spot on May 11, establishing the Beatles as a force to be reckoned with.

Paul McCartney: This album was one of the main ambitions in our lives. We felt it would be a showcase for the group, and it was tremendously important that it sounded bang on the button.... It was break or bust for us. We did "Twist And Shout" last, because if we'd done it first, we couldn't have done any of the others. John's voice would have gone.

Several album cover designs were discussed until producer George Martin hired Angus McBean, a distinguished British photographer, to do the job. The sleeve cover shows the Beatles looking over the entrance stairwell of EMI's Manchester Square Building in London.

The album spent 70 weeks on the UK charts and was No. 1 for 30 weeks before being replaced by With the Beatles.

Beatles - The Beatles vs The Four Seasons 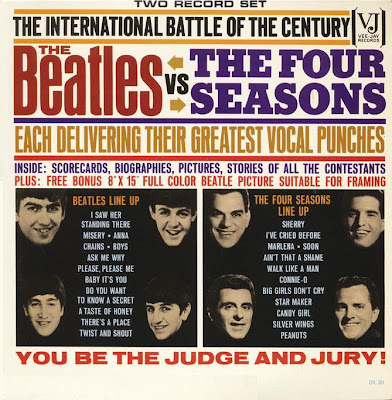 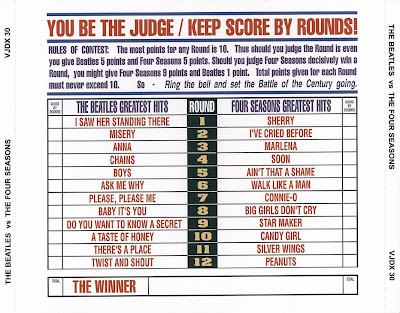 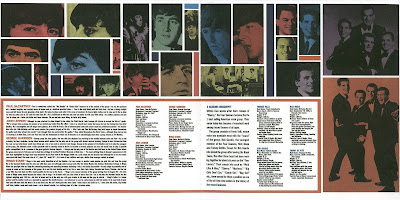 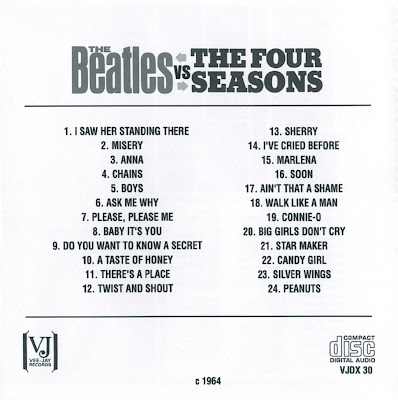 The Beatles vs The Four Seasons (VJ Records)
VJ Records had first rights to distribute the Beatles records circa 1962 - 1963. VJ also had similar rights to distribute The Four Seasons. While mainly used as a way for disk jockey's to boost ratings, both the Beatles and the Four Seasons were very popular on the East Coast radio shows. Philadelphia was a Four Seasons stronghold. VJ later released the album. It is very rare. I found this double vinyl LP album in King Karol record shop in NYC, mismarked for just $5.00. I later sold it at a Beatlesfest show in the Meadowlands for $75.00. It contained VJ's Introducing The Beatles album's songs again.
Posted by the original PC Music & TechnoGeek at 4:01 PM
Labels: Beatles - The Beatles vs The Four Seasons
Newer Posts Older Posts Home
Subscribe to: Posts (Atom)