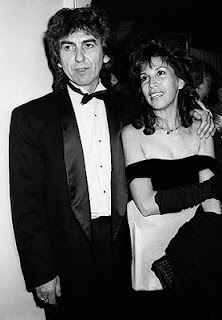 George Harrison and his wife, Olivia, in London, circa 1983.

As Paul McCartney, Ringo Starr and George Harrison dug through their archives to assemble the Beatles Anthology documentary in the mid-Nineties, Harrison made a private vow to his wife, Olivia: "One day, I'll do my own anthology." The ex-Beatle, who died in 2001, never got the chance, but his wife made sure his wish came true in grand fashion. In October, HBO will debut Martin Scorsese's two-part documentary, George Harrison: Living in a Material World – and

Olivia has compiled a lavish companion book packed with unseen photos and diary entries. "I'm fairly awed by what Marty has put together," says Olivia. "It's a story that truly captures the essence of George."

The project had its start in 2005, when Olivia attended the London premiere of Scorsese's Bob Dylan documentary, No Direction Home. She shared her hope for a similar movie about her husband with the film's producer, Nigel Sinclair. After discussing possible directors for months, the pair "delicately approached" Scorsese. "To our surprise and delight, he said he was very intrigued by George's story," Sinclair recalls.

The center of the film is Harrison's spiritual quest, a search for meaning in life that began with a Beatlemania-era reve­lation that material success wasn't necessarily accompanied by fulfillment. "He was trying to find a way to simplicity, a way to live truthfully and compassionately," Scorsese says. "It was never a straight line, but that's not the point. I think he found an understanding: that there's no such thing as 'success' – there's just the path."

The documentary includes new interviews with McCartney, Starr, Yoko Ono, George Martin, Tom Petty, Eric Clapton (who recalls watching Harrison write "Here Comes the Sun") and many more. But Scorsese and his team relied heavily on archives kept by Harrison himself: footage of the Beatles on vacation; a recording of Harrison's first sitar lesson with Ravi Shankar; home movies of Harrison fooling around in his recording studio with his son Dhani. "We set up a little production office in our house," says Olivia. "George lived in the house for 30 years, and he would just throw things in this drawer and that drawer. So every cupboard had something in it."

The production team set up research offices in New York and London, working for years to find footage and photographs, including every filmed Harrison interview they could track down.

From their sleepless Hamburg days to their Let It Be-era squabbles, the Beatles' story has been told again and again, so Scorsese took great pains to use rare or unseen footage for the first part of the film. "The scenes of them running from hotel rooms and airports and such are just a little bit different than the ones you've seen," says Sinclair. "He approached the Beatles story from George's perspective, so it becomes a more inside, more first-person experience."

The film doesn't shy from Harrison's darker side, showing footage of a ravaged performance from his 1974 solo tour, and hinting at challenges in his marriage. "He never said he was a saint, but he always said he was a sinner," says Olivia. "He wanted to do everything in life. He really did."

The surviving Beatles provide some of the film's most powerful moments: McCartney makes an impassioned argument that anyone who thinks only he and Lennon were important in the group is wildly wrong; Starr begins to weep when he recalls visiting Harrison as the guitarist battled terminal lung cancer.

The post-Beatles section of the film has the most surprises, from intimate footage of Traveling Wilburys jamming to Olivia's harrowing account of a 1999 home invasion by a violent, deranged fan. It also gives equal weight to Harrison's nonmusical ventures: his work as a movie producer; his motor-racing fandom; his loving efforts to restore his country estate. "George thought hard about how to live his life after being a Beatle," says Sinclair, "and what I take away from this film is that he figured it out."