The Last Lennon/McCartney Song? (Now And Then)

Published on Aug 20, 2014
"Now And Then" (also known as "I Don't Want To Lose You" or "Miss You") is the name given to an unreleased composition by John Lennon. It was first recorded in demo form in 1978 and was considered in 1995 as a third possible reunion single by Lennon's former band, The Beatles, for their 1995 autobiographical project The Beatles Anthology.

Lennon wrote "Now And Then" in the late 1970s, around the same time as "Free As A Bird" and "Real Love". He recorded the unfinished piece of music in a demo form at his home at the Dakota Building, New York City, around 1979. The lyrics are typical of the apologetic love songs that Lennon wrote in the later half of his career. Despite reports, for the most part the verses are nearly complete, though there are still a few lines that Lennon did not flesh out on the demo tape performance.

In January 1994, Paul McCartney was given two tape cassettes by Lennon's widow Yoko Ono that included home recordings of songs Lennon never completed or released commercially. The songs on the tape included the eventually completed and released "Free As A Bird" and "Real Love", in addition to two other songs was a tape with the words "for Paul" scrawled hastily in John's handwriting, which included "Grow Old With Me" and "Now And Then". In March 1995, the three surviving Beatles began work on "Now And Then" by recording a rough backing track that was to be used as an overdub. However, after only two days of recording, all work on the song ceased and plans for a third reunion single were scrapped permanently.

According to McCartney, George Harrison "didn't want to do it," possibly because new verses would have had to be written. Producer Jeff Lynne reported that "It was one day—one afternoon, really—messing with it. The song had a chorus but is almost totally lacking in verses. We did the backing track, a rough go that we really didn't finish." An additional factor behind scrapping the song was a technical defect in the original recording. As with "Real Love", a 60-cycle mains hum can be heard throughout Lennon's demo recording. However, it was noticeably louder on '"Now And Then", making it much harder to remove.

Throughout 2005 and 2006, press reports speculated that McCartney and Starr would release a complete version of the song in the future. On 29 April 2007, the Daily Express reported that the song might be released to coincide with the Beatles catalogue being released for the first time via digital download. Additional reports circulated that same year that McCartney was hoping to complete the song as a "Lennon–McCartney composition" by writing new verses, laying down a new drum track recorded by Ringo Starr, and utilising archival recordings of Harrison's guitar work.

In April 2008, The Sun reported that "there have been discussions about finishing 'Now And Then.'" From there, the story was picked up and repeated by a number of music and entertainment media sources.

A popular fan remix from 2007 called the "1995 edit" consists of Lennon's original demo along with instrumental overdubs by an unspecified artist and samples from various 1960s Beatles songs. Contrary to repeated misconception, this remix does not contain any of the work that the three surviving members of the Beatles recorded in the 1990s.

Finally, The Beatles have released a film trailer and a poster, as well as information about what started as a documentary about The Beatles live concerts, but ended up as a broader perspective on the first part of their career, from 1962 to 1966. 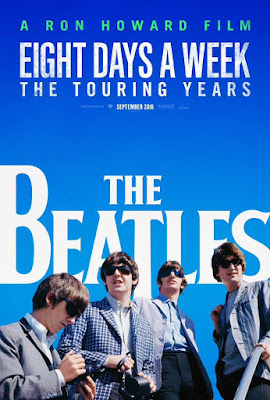 The Beatles: Eight Days A Week - The Touring Years will be getting a theatrical all-star world premiere in London on September 15th, and the same day it will also be screened in France and Germany. Other countries will follow, currently release dates have been published for Australia and New Zealand (September 16th) and Japan (September 22nd), in addition to the previously mentioned UK, France and Germany (September 15th).

Hulu will have the exclusive US streaming video on-demand rights to the film on SVOD beginning September 17th – marking the first feature film to debut on Hulu following its theatrical premiere. The Beatles: Eight Days A Week - The Touring Years is the first film acquired by Hulu’s Documentary Films arm which will serve as a new home for premium original and exclusive documentary film titles coming to Hulu.

The film is based on the first part of The Beatles’ career (1962-1966) – the period in which they toured and captured the world’s acclaim. Ron Howard’s film will explore how John Lennon, Paul McCartney, George Harrison and Ringo Starr came together to become this extraordinary phenomenon, The Beatles. It will explore their inner workings – how they made decisions, created their music and built their collective career together – all the while, exploring The Beatles’ extraordinary and unique musical gifts and their remarkable, complementary personalities. The film will focus on the time period from the early Beatles’ journey in the days of The Cavern Club in Liverpool to their last concert at Candlestick Park in San Francisco in 1966.
Featuring rare and exclusive footage, the film is produced with the full cooperation of Paul McCartney, Ringo Starr, Yoko Ono Lennon and Olivia Harrison.

Richard Abramowitz’s Abramorama will handle the US theatrical release of the film that is set to be an event driven experience with a few special surprises planned for cinemagoers.


Of special interest is a brief sequence near the end of the trailer, featuring colour footage shot from behind the band, from the Washington DC concert, February 1964.