I am a child of Beatles fans; we owned nearly every album in original mono vinyl pressings. But somehow there was a hole in our collection—a whale-sized hole, it turned out—because we didn’t have a copy of the White Album. I was introduced to it later by a friend, who shared its secrets with me like one would share the favorite work of a favorite poet—reverently. We delved into the history and learned that recording sessions were notoriously fractious—with Ringo stepping away for a while and Paul stepping in on the drums, and with the others recording solo, sometimes with session players, rarely in the same room together— a situation reflected in the tracking of the record, which feels like a compilation of songs by each Beatle (but Ringo), rather than the usual smooth affair of Lennon/McCartney, and occasional Harrison productions. 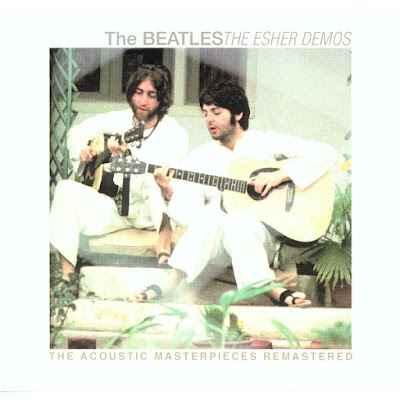 That ranginess is what makes the White Album special: it’s feels so familiar, and yet it’s not like anything they’d done before and presages the genius to come in their solo careers. So imagine my surprised delight at stumbling across a bootleg that die-hard completists have surely known about for ages (though it only saw release in 2002): The Beatles: Unplugged is a recording of acoustic songs, most of which would appear on the the White Album, played and sung by John, Paul, and George at George’s house in Esher—hence the bootleg’s subtitle, the Kinfauns-Sessions (Kinfauns was the name of George’s home). Here are the close vocal harmonies that seemed to mark a group of musicians in near-perfect harmony with each other (but without Ringo, again). And here are some of the Beatles’ most poignant, pointed, and vaudevillian songs live and direct, without any studio tricks whatsoever.
Of course these were recorded as demos, and not meant for release of any kind, but even so, they’re fairly high-quality, in a lo-fi kind of way. Listening to the songs in this form makes me think of the folk/psych revivalism of the so-called New Weird America that hearkened back to so much sixties’ trippy playfulness, but mostly eschewed the major label studio sound of sixties’ records and welcomed prominent tape hiss and single-track, bedroom takes. Given the rapid pop-culture recycling that is the hallmark of the early 21st century, The Beatles: Unplugged sounds strangely modern. 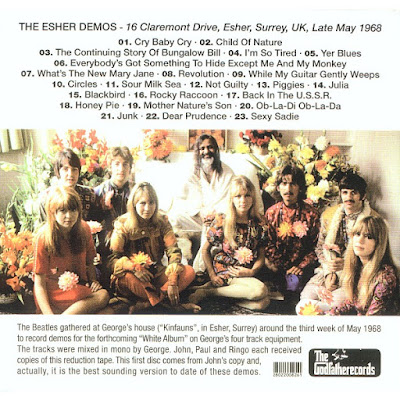 The Unplugged session includes a wonderfully airy rendition of “Dear Prudence,” which like so many of these songs, was written during The Beatles’ sojourn in India, about Mia Farrow’s sister (a complete tracklist is here). The compilers of the release have tacked on three additional songs: “Spiritual Regeneration India” (also a birthday tribute to The Beach Boy’s Mike Love), an oddly upbeat studio run-through of “Helter Skelter,” and a free-form acoustic medley of traditional songs called “Rishikesh No. 9” (also called “Spiritual Christmas”). In addition to the slew of White Album songs, the recording session also features McCartney’s “Junk,” which later appeared on his 1970 solo album McCartney and John Lennon’s “Jealous Guy” (here called “Child of Nature”), which surfaced on 1971’s Imagine. As Allmusic’s Bruce Eder writes, Unplugged is a bootleg so good, “the folks at Apple and EMI ought to be kicking themselves for not thinking of it first.”

Eric Clapton’s Isolated Guitar Track From the Classic Beatles Song, ‘While My Guitar Gently Weeps’ (1968)
Hear the 1962 Beatles Demo that Decca Rejected: “Guitar Groups are on Their Way Out, Mr. Epstein”
How Bertrand Russell Turned The Beatles Against the Vietnam War
Peter Sellers Reads The Beatles’ “She Loves You” in Four Voices
Josh Jones is a writer and musician. He recently finished a dissertation on land, landscape, and labor.