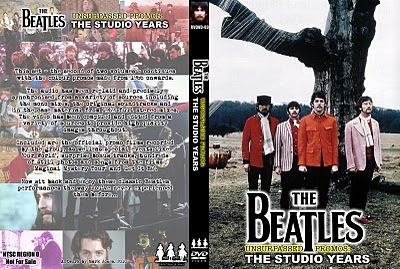 Due out soon is a collection of Beatles music videos (aka "promotional films"), which is set to replace all previous efforts you may know of, like the "Chronology" DVD's from Picture Perfect, the "Watching Rainbows" discs from Silent Sea, the "1967-1970" DVD from Beat, "The Beatles Video Collection Vol. 1-3" from the fake Apple company, the "1" DVD on an unknown label, "The Beatles by the Bushel" from New Depression Music, the Red and Blue video collections as well as the FAB Productions' Video Collection Vol. 1 and Vol. 2. The new DVD project is a 4 disc set under the title "Unsurpassed Promos" collecting not only all the Beatles' official promotional music videos from 1962-1970, but a version of every song they mimed to on tv, songs from their films and something like 350 still photos from the shootings of the promo films. Each video will be presented in the best quality available and every effort has been made to avoid videos that have station logos. The set will also include the last 30 minutes of "Let It Be" in stereo. The promos have been synched to the mono CD's, but whenever a promo features an alternate mono mix, that mix will be included as an audio option. Some of the videos have had to be pieced together from various sources in order to get the best quality. The fan behind the project is the same guy who gave us the "Unsurpassed Broadcasts" collection, as well as the "Empire Strikes Back" DVD and CD. Naturally, because of his reputation, when he announced his plans for this set, he was contacted by people who sat on superior material they offered for inclusion.

When "1" was released back in 2000, then head of Apple Corps Neil Aspinall was asked what the next step was, perhaps a collection of The Beatles' music videos? His answer was that "No, that would be too obvious". As you can see by the titles I have mentioned and linked to in this post, that statement made for a bootlegger's paradise, as does the absense of an official "Let It Be" DVD.
The "Unsurpassed Promos" project is made by fans, for fans, and for free. The 4-disc set will be leaked to internet download sites and traded among fans. Undoubtedly, bootleggers will rip the set and offer it for money somewhere along the line, but that's not something that can ever be avoided, neither with official nor unofficial products.

Speaking of fan made DVD's, the "Magical Mystery Tour Revisited" DVD has now been finished and will be out any day. 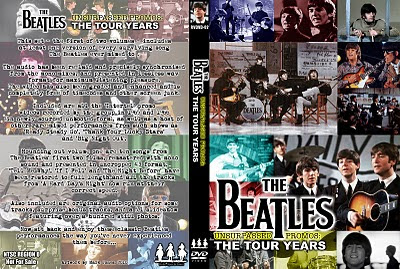 Here's an update on the Unsurpassed Promos DVD set we told you about earlier. The 4 disc DVD set is due out on the internet circuit at the start of November.
All tracks are mimed performances, except (*), the Let It Be stuff and some of the later 'concept' films. Sound is remastered mono except (=) which are stereo. Tracks marked (+) have two audio options. More information will be included in the released material.

Help! +
You're Gonna Lose That Girl
You've Got To Hide Your Love Away
I Need You
The Night Before
Another Girl
Ticket To Ride +
I Feel Fine version 1 and 2 +
Help! +
We Can Work It Out versions 1 and 2 +
Day Tripper version 1 +
We Can Work It Out version 3 +
Day Tripper version 3 +
Paperback Writer/Rain (colour, with intro) +
Paperbacks writer (monochrome) versions 1-3 +
Rain (monochrome) versions 1 and 2 +
Bonus Tracks x 3 +
5.1 Slideshow

The set will be traded among collectors and distributed freely on download sites. Yes, it's not complete, there are promos missing. But we hear it will look a lot better than Chronology. 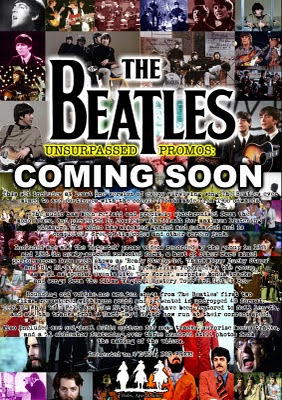