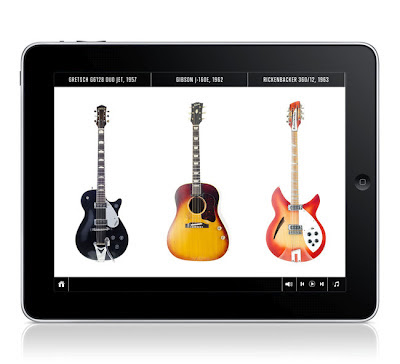 By DAVE ITZKOFF, from the New York Times


Some music fans understandably regard the guitars owned and played by George Harrison, in his Beatles career and as a solo artist, as sacred relics that may still contain fragments of their former master’s spirit.
Dhani Harrison, the son and only child of George Harrison, appreciates why the instruments he inherited from his father are so venerated but sees things slightly differently.

“It’s not like Spinal Tap,” he said recently, referring to that satirical rock ’n’ roll troupe. “ ‘Don’t point at it, don’t even look at it.’ They’re not quite like that.”
He added: “Paintings should be in museums and should be able to be seen. Instruments should have to be played every once in a while. Otherwise they’ll perish.”

While he can’t share his father’s guitars with anyone who would like to pick them up and play them, Mr. Harrison is providing iPad owners with an interactive way to pore over the cherished instruments.

On Thursday a new iPad app that Mr. Harrison helped to create, called The Guitar Collection: George Harrison, is scheduled to go on sale. At a cost of $9.99, the app will offer users detailed 360-degree studies of some of his best-known gear; their histories and other background information; and multimedia of the guitars in action. Mr. Harrison, who is 33 and a rock musician in his own right, said in a telephone interview from Los Angeles that he too reveres the instruments, having grown up with them as if they were members of the family.
“I’ve learned to love this equipment firsthand through seeing my father play it and through seeing it used on every great bit of footage ever,” he said.

“If anyone needs anyone to look after a psychedelic piano, give it to me,” he added. “I know what to do with it.”

The best way to show respect for his father’s musical trove, he said, is to make it available to others, at least in a virtual capacity. “It means that I can play around with these things every day,” he said, “when I’m on the bus or in the car, and not have to worry about scratching them.”

The app, which is authorized by the George Harrison estate and developed by Bandwdth Publishing, works like a miniature showroom and includes digital replicas of seven of the guitars.

Images of George Harrison’s 12-string Rickenbacker 360/12, or the Fender Stratocaster he painted in DayGlo colors and named Rocky, can be manipulated and rotated from every angle; numbered details show the modifications he made to the instruments and, in accompanying audio files, Harrison tells stories of how he acquired the guitars (like the Gretsch Duo Jet he says he bought from a sailor in Liverpool for about £70 in 1961).

Users can see every Beatles or solo track Harrison used the guitars on and play them through the app. (Songs already in your iTunes library can be played in full; otherwise you’ll hear a short excerpt.)

The 360-degree guitar models are the creations of Steven Sebring, the photographer and filmmaker who helped create a similar app based on his documentary “Patti Smith: Dream of Life.”

Last fall Mr. Sebring traveled to Friar Park, the Harrison mansion in Henley-on-Thames, England, to photograph the guitars with a camera on a turntable apparatus that he operates with his own software. The guitars were supported by plexiglass stands that Mr. Sebring started designing before the trip, basing their dimensions on copies of Harrison instruments he found in music stores.

But when he arrived at Friar Park, Mr. Sebring said, he discovered “they weren’t really exact replicas out there.” So, he added, “we were literally sitting on the dining room floor in Friar Park with some plastic adhesive glues and creating these stands for these guitars, hoping to god that they would fit.”

The Harrison guitars were later sent to Los Angeles for an exhibition at the Grammy Museum, where performers like Ben Harper, Josh Homme and Mike Campbell, as well as the late-night host and guitar geek Conan O’Brien, were invited to play them for video segments seen on the app.

Mr. Campbell, a guitarist who performs with Tom Petty and the Heartbreakers, said that picking up Harrison’s Rickenbacker and playing the chords to “You Can’t Do That” resulted in “an out-of-body experience.”

“I had to stand up for a second, it was so intense,” Mr. Campbell said. “It was that instrument and that sound that inspired me so much as a kid. And there I was, hearing it up close. It was a pretty special moment, really.”

For admirers who can’t have the same hands-on experiences, Dhani Harrison is already planning other offerings. More of his father’s guitars will be added to the app, he said, in the weeks after it is released. (The additional guitar upgrades will be free to people who have already purchased the app.)

And he said he would like to create other apps that would display the guitar collections of rock stars like Eric Clapton (George Harrison’s longtime friend), Jimi Hendrix, Pete Townshend of the Who, and Angus Young of AC/DC.

“I don’t know how well I’d do, sitting there photographing the white Hendrix Woodstock Stratocaster,” Mr. Harrison said. “Then it’ll be me that’s in tears, and everyone else will be going, ‘It’s O.K.’ ”

For all the worship bestowed on the Harrison guitars, Mr. Campbell said his own encounters with the quiet Beatle suggested he was not especially precious about them.

“I was talking to him about how much I loved the guitar sounds on their early records, the Gretsches and the Rickenbackers,” Mr. Campbell recalled. “And he went: ‘Oh, yeah. They were kind of clunky and hard to play. If we had Fenders, we could have been really good.’ ”