For Sir George and Giles Martin, The Beatles’ legacy is all about ‘Love’ 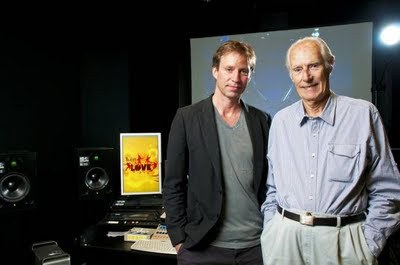 Giles Martin and his father, Sir George Martin, in the listening room at The Love Theater at the Mirage on Tuesday, June 7, 2011. They are in town to celebrate the fifth anniversary of Cirque du Soleil’s “Love” at the Mirage on June 8.

CHRISTOPHER DEVARGAS
Giles Martin and his father, Sir George Martin, in the listening room at The Love Theater at the Mirage on Tuesday, June 7, 2011.

The spirited discussion is all about The Beatles, and you feel this conversion could wind on as long as the long and winding road itself.

Giles Martin is talking of resurrecting ample, yet-unreleased footage of The Beatles’ concert performances. He’s reviewing the material for a Martin Scorsese-directed documentary about George Harrison. As always in these sorts of Beatles projects, it is a labor of love.

“A lot of the live footage that you see -- and he knows a lot better than I do, because he was there -- is of an incredibly good, tight rock band. A lot of people don’t think of The Beatles as live players, but they could really play.”

That swift aside, the moment Giles Martin talks of the “he” sitting next to him, is directed to his father, Sir George Martin. Martin was the unlikely figure with a background in classical music and comedy recordings (British favorites Peter Sellers and The Goons, primarily) who produced nearly every note The Beatles recorded, all the music being celebrated Wednesday as the Cirque du Soleil/Beatles stage show “Love” celebrates its fifth anniversary at the Mirage.

With no prompting necessary, Sir George interjects as his son speaks.

“They were a great band, a great band,” the rock ’n’ roll legend says in his familiar, guttural English accent. “I mean, they started off very poorly, really, because when I first met them, they didn’t really excite me very much musically. Their songs, I thought, were pretty crappy. But they learned so quickly, they shot up like hothouse plants.”

A little later, at the end of the confab, Martin recalls attending The Beatles’ first U.S. concert, a riotous show at the 8,000-seat Coliseum in Washington, D.C.

“They were in the round, and they had to play a set of songs to each quadrant of the arena,” Martin recalled, chuckling. “They had to move their equipment themselves, and Ringo’s drums got stuck in the process. The audience was almost entirely kids, and a young boy, about 12 or 13 years old, was sitting near me. He came over and said, ‘Mister, are you a Beatles fan?’

“I said, ‘You might say that, yes.” And he said, ‘Wow!’ He was quite impressed that this old guy was such a Beatles fan.”

This old guy still is, at age 85. Sir George is something of a producer emeritus for The Beatles now, as is Giles (born in 1969, the year “Abbey Road” was released). Both are in Las Vegas to celebrate the show’s anniversary.

For the anniversary performance, the Martins will be joined by Paul McCartney, Yoko Ono and George Harrison’s widow Olivia and son Dhani. Ringo Starr will not be able to attend, as he is touring in Europe with his All-Starr Band, but is sending a video message to be shown at the top of the show.

Sir George and Giles touched on several topics during our interview in the monitor room, or nerve center, at the core of The Love Theater. Some highlights:

On the band’s fabled unanimity: From Sir George, “That’s the great thing about them, they were very much unified. After their initial success, which was a hell of a shock to these kids who were pretty much from nowhere, within a year they were the talk on everyone’s lips from Britain to America and eventually the world. That’s a pretty heady wine to drink.

“Because of that, they were like a fort, really, each corner made up four pieces. They were four guys, bonded, and I think that made them such a tight band.”

On the memories offered by the surviving Beatles during the production of “Love”: From Giles, “Ringo remembers, he remembers. So does Paul. Of all the stuff that was done, all the chopping and the changing, my biggest memory of the whole show was sitting with both Paul and Ringo, separately, on different days, just listening to ‘Come Together,’ and they both went, ‘We were really good on this day. We could really play.’ ”

“And Ringo even went, ‘Calfskin drum heads! That’s what I used to get that sound! He remembered the drum heads he used on his drums. It is amazing, but I guess it is that attention to detail -- people think that things just happen from happenstance, but it’s really because people care and they dig in and work really hard.”

On the communal process that led to a song’s final version: From Sir George, “They were all intent on getting the best possible sound out of a piece of music, whether Paul wrote it or John wrote it, they would listen to it and see what they could do. If it didn’t go properly, if there was any doubt at all, they would discuss it. One time, John wasn’t sure about a song and said, ‘What do you think about that, Ringo?’ and Ringo said, ‘I think that’s crap, John.’ And John listened to him very rigidly and said, ‘Right. Let’s move on.’

“One of the best things about Ringo was how he flowed, he listened to his pals and picked up the tempo. His playing, when you hear him working with Paul on bass and the other guys on guitars, has soul. It was just remarkable.”

On the continuing evolution of the stage show at the Mirage: From Giles: “The show’s in really good shape. I just check on the show because the cast changes, and we tighten the show every year. So, really, it’s a much better show now than when it opened five years ago, a way better show. A lot of things have changed (he is asked for an example). 'Blackbird.' 'Blackbird' was a sort of a stand-up comedy routine in a broad, sweeping stage of comedy. (At this, Sir George adds, “It was awful.”) Now it’s been reworked and has more music in it.”

“It’s a very interactive thing. The people who look after the show, who actually work on the show day-to-day, we’re really lucky at ‘Love’ to have people who really care about what goes on.”

On the difference between the stage show’s music and what is offered on the "Love" soundscape CD: From Giles, “The CD and the show have to be different. The show is 90 minutes, and there are things we found when we did the CD that had to be altered. The show has songs that are truncated. ‘Eleanor Rigby’ is missing a verse. ‘Revolution’ is in half. ‘Back in the USSR’ is in half. ‘Come Together’ is missing verses. When you have a CD, you have to put those right, or fans get annoyed.”

On the suggestion that a CD from the show was released to head off unauthorized recording of the performances inside the theater: From Giles, “No, purely the idea was purely to make a CD, it made sense to do that.” From Sir George, “The sound of the show in the auditorium is different than on CD. It has to be. You can’t have a 2,000-seat auditorium, which is in the round with speakers going in all different directions, becomes very diffused. On CD -- well, it’s not even CDs, they’re mp3s -- are heard over earphones, which is quite a different thing. We had to make the sounds work in both circumstances, and I think we did.”

On Sir George’s involvement in the production: From Sir George, “When we came here to do the show, Giles did most of the work, basically because work had to be done very late at night, starting at 11 through until about 4 or 5 in the morning. I wasn’t going to do that, so I said, “Giles, you’ve got yourself a nice job (slaps Giles’ leg)!” … But I don’t listen to much music nowadays, because I am very deaf. In the years since we opened (in 2006), I was just about to hang it up … and in the past three, four years, my hearing has taken a nosedive. I couldn’t take on that show now. Fortunately, Giles can.”

On the quality of The Beatles’ musicianship in their original recordings: From Giles, “There was a perception of The Beatles being four likable lads from Liverpool with funny suits and funny haircuts and waving, but what they really were was just a really good band.”

From Sir George, “They became, each one of them, a master at his own job. Paul and John, of course, wrote the bulk of their hits. George was left to struggle by himself, but he came through, too, from, ‘Here Comes the Sun’ onward, started really writing great songs. … Ringo has established himself with a sound that was quite unique and is the best rock drummer in the world. He would spend ages getting his drums the right sound. He would tune them like mad. He was dedicated to it.”

On the arrival of Ringo in the band, which coincided with the recording of "Love Me Do" and Martin’s decision to use session player Andy White in place of Starr on that recording: From Sir George, chuckling, “There is this story that I turned (Ringo) down in the beginning. Wasn’t really the way it was at all. I wasn’t told, in the early days, that he was coming, so we used another drummer.”

On the likelihood of another band following a path to stardom similar to The Beatles’: From Giles, “It’s hard to imagine it happening now, that’s the sad thing. The amount of stuff you have to go through, you have to do so much marketing and spiel. I remember meeting a guy in the ’90s who was the A&I guy for Hootie & The Blowfish. They’d just had a huge album (“Cracked Rear View”) that sold 15 million copies, and they released their next album (“Fairweather Johnson”) a year and a half later, and he goes, ‘We released that album too soon after.’ Well, The Beatles were releasing three albums a year, and that just doesn’t happen now.”

On the band’s seemingly boundless appeal over generations: From Giles, “There were a lot of bands around at the time that had interesting stories. Gerry and the Pacemakers, The Hollies, even The Kinks -- who were an amazing band -- didn’t have that same level of being able to push the boundaries all the time, or of having the capability of having three lead singers and three great songwriters in the same band. It’s so rare, you can’t think of anyone matching it.”

From Sir George: “I think they’re so damn good they’ll be with us for generations, into the middle of the next century. They’re just great musicians and great writers, like Gershwin or Rodgers and Hammerstein. They are there in history, and The Beatles are there in history, too. They’ll be there in 100 years, too. But I won’t be.”

At that, Sir George Martin grins once more. He won’t be around for the end. None of us will be, because there is no end.

Not for The Beatles.