Former Beatle, 68, to wed New Yorker Shevell, 51, but no details yet of when and how he proposed 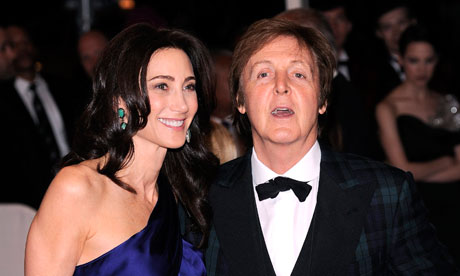 Paul McCartney and Nancy Shevell. 'I just like being in love', the former Beatle reportedly said. Photograph: Justin Lane/EPA
His place in the rock'n'roll hall of fame is secure, as is his only slightly dented fortune, and yet still it seems that all Paul McCartney needs is love. Three years after his second marriage ended in an acrimonious divorce, the former Beatle, 68, is to take plunge – announcing his engagement to his girlfriend, Nancy Shevell, a 51-year-old New Yorker. McCartney's spokesman, Stuart Bell, confirmed that recent media speculation about an impending engagement to his girlfriend Nancy Shevell was true, but declined to give further details on when and how the musician proposed, saying only: "We're all thrilled for him." McCartney's first wife, Linda Eastman, a photographer, died of cancer in 1998. They married in 1969 and she was credited with introducing him to vegetarianism and animal rights activism, and was also in his band Wings. McCartney married his second wife, Heather Mills, a former model, in 2002 and they divorced in 2008. After seeking a £125m settlement, she was awarded £24.3m. Shevell is said to get on well with McCartney's five children, having appeared at Stella McCartney fashion shows, awards ceremonies and at Sir Paul's concerts. She is a wealthy woman in her own right, is on the board of the New York Metropolitan Transportation Authority and is vice president of a family-owned business conglomerate. She was married for more than 20 years to the lawyer Bruce Blakeman, a close friend of the former New York governor George Pataki, who appointed her to the MTA board. Although his second marriage ended in an courtroom battle with Mills, a former model, McCartney remains optimistic about affairs of the heart, reportedly commenting on his romance with Shevell: "I just like being in love."