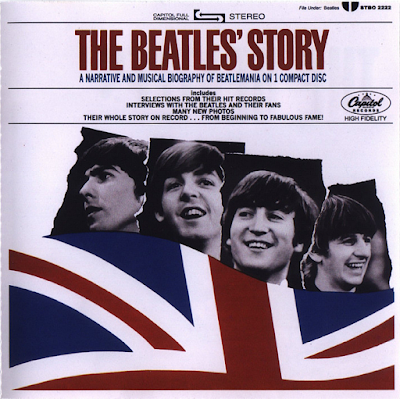 The Beatles' Story is the sixth album by the Beatles in the United States, issued on 23 November 1964 by Capitol Records in both mono and stereo formats (although the mono was merely a fold-down of the stereo mix). It is a documentary double album featuring interviews, press conferences, snippets of original or orchestral versions of Beatles songs with voice-overs. The easy listening excerpts were created, produced and arranged by Stu Phillips with the Hollyridge Strings originally recorded for the first Capitol Records' Beatles Song Book.[1]

This documentary album was issued in response to interviews of the Beatles collected on the Vee-Jay Records release, Hear the Beatles Tell All.[citation needed]

Originally, Capitol Records intended to release the group's 1964 performance at the Hollywood Bowl, but due to a lack of advanced live recording and sound enhancement technology and the excessive amount of loud screaming fans on tape the album was shelved. Another plan was to release a 2 LP 'Greatest Hits' album for the Christmas market. Four songs were to make their Capitol debut on this album: "A Hard Day's Night," "Misery," "There's a Place," and "From Me to You." The album was compiled, but never issued.

The Beatles' Story entered the Billboard Pop Albums on 12 December at number 97, and on 2 January 1965 it reached its peak position at number seven, where it remained for four weeks before beginning its slide down the charts.[2] It has been certified a gold record by the RIAA;[3] it was also released in Canada and is currently out of print. It was released by Toshiba EMI in Japan on the Apple label (in stereo) in a box set with a deluxe 24 page 12"x12" booklet that contains the entire text of the script in English and Japanese.

The album contains a brief stereo excerpt of "Twist and Shout" performed at their 1964 Hollywood Bowl concert. The album was only released on cassette tape in Canada (4XBB 2222) and Japan (ZR44-1019), and was never issued at all on a stereo 8-track cartridge tape. The Beatles' Story was being prepared for release on digital audio tape in 1996, but when the format failed commercially the plan was scrapped.[citation needed] In 2014, The Beatles Story was made available on CD for the first time in the Beatles boxed set, The U.S. Albums. Running time is: 49:22. 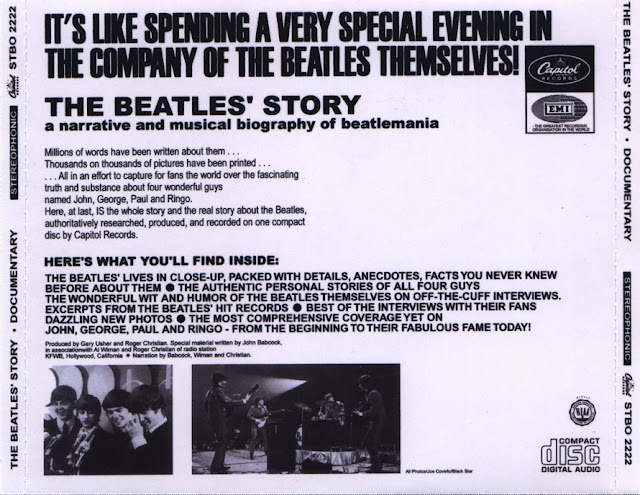 You can listen to it here:

Looks like the US Postal Service is to honour John Lennon in 2018.
The newest stamp in its Music Icons series will honor singer and songwriter John Lennon (1940–1980), “….a rock ’n’ roll hero successful both as a founding member of the Beatles and as a solo artist.”

If the photograph for the stamp looks familiar, it was most recently used on the cover of Philip Norman’s book John Lennon – The Life, which came out in 2008. The image is by legendary rock photographer Bob Gruen who knew Lennon well and has taken many iconic images of him. The photograph comes from a photo shoot for the cover of his 1978 album

The Postal Service has previously honoured The Beatles as a group on a 1999 postage stamp as part of its Celebrate the Century series. That issue depicted the Yellow Submarine from the animated movie and soundtrack Yellow Submarine. The upcoming Lennon release will be the first to feature an actual likeness of one of the Beatles on a U.S. stamp.
In 2007 Britain’s Royal Mail issued ten different stamps celebrating the importance of The Beatles to Britain and the world. These depicted album covers (With The Beatles; Help!; Revolver; Sgt. Pepper; Let It Be; and Abbey Road, plus the single ‘Love Me Do’), along with images of Beatle memorabilia. For more detail on those releases click here.
Detailed information and the issue date for the Lennon US Postal Service stamp will be revealed later. The stamp design is preliminary and subject to change until issuance dates.