Just when you thought that everything that could be said that was new, fresh, or unusual about the Beatles' later history was already out there, along comes The Beatles: Unplugged, a bootleg CD so good that the folks at Apple and EMI ought to be kicking themselves for not thinking of it first. This disc (which is sort-of subtitled "The Kinfaun-Session," referring to George Harrison's Esher home) pulls together the 23 songs that Harrison, John Lennon, and Paul McCartney recorded as works-in-progress at Harrison's home in May of 1968. Most of what's here was eventually heard either on The Beatles [White Album], or various solo works ("Child of Nature" surfacing with new lyrics as "A Jealous Guy," etc.) or B-sides ("What's the New Mary Jane"), and on various bootlegs. What makes this presentation better than most is that it's part of that "digipak" bootleg series that's been coming out of Europe since late 2000 and generally knocking listeners out with its quality. The production here is a match for any legitimate release, not just in sound quality but also the care that went into the selection, order, and editing of the tapes; there's some hiss here and there, to be sure, and a few tracks are close to overload on the sound, but there's nothing here that will make you jump to lower the volume or skip to the next cut -- in fact, chances are most of the songs here will get repeated more than once. It's a lot like listening to an "unplugged" version of The Beatles (even re-creating The Beatles [White Album]'s packaging), since most of it is represented here, and in excellent form. Indeed, the version of "Revolution" on this disc -- just to cite one example -- is as good as the released one, only brighter, and, if you will, bouncier, as the trio has unbridled fun with the lyric, the beat, and the rhymes without the need to pump up the wattage or the seriousness of it all; if the finished song is John Lennon's message to the world about politics, hate, and manipulation of the Beatles, this is his handwritten draft of that message, with all of his momentary digressions and mental edits left in. McCartney and Harrison's songs are just as well represented, and the only thing missing is a contribution by Ringo Starr, who didn't participate in these recordings. The curious element is that it's the hard-rocking songs -- "Yer Blues" and "Back in the USSR" -- that come off the best, even though they're the most different from the finished versions; the demo of "Ob-La-Di, Ob-La-Da" is just as entertaining, as the trio plunges headfirst into reggae armed with just their guitars and some good intentions. As the notes point out, whatever stresses the group may have been experiencing as a formal entity, the three guitarists had some productive and harmonious sessions and they still sounded as cool, creative, and cutting edge as they ever did. As bonus cuts, the makers have added "Helter Skelter" from a studio run-through, and thrown on "Spiritual Regeneration," the Beatles/Beach Boys ode to the Maharishi (which segues into the Beatles' birthday greeting to Mike Love) and a somewhat less-entertaining, informal, acoustic medley of traditional songs, all tracks recorded in India.
Source: AllMusic Review 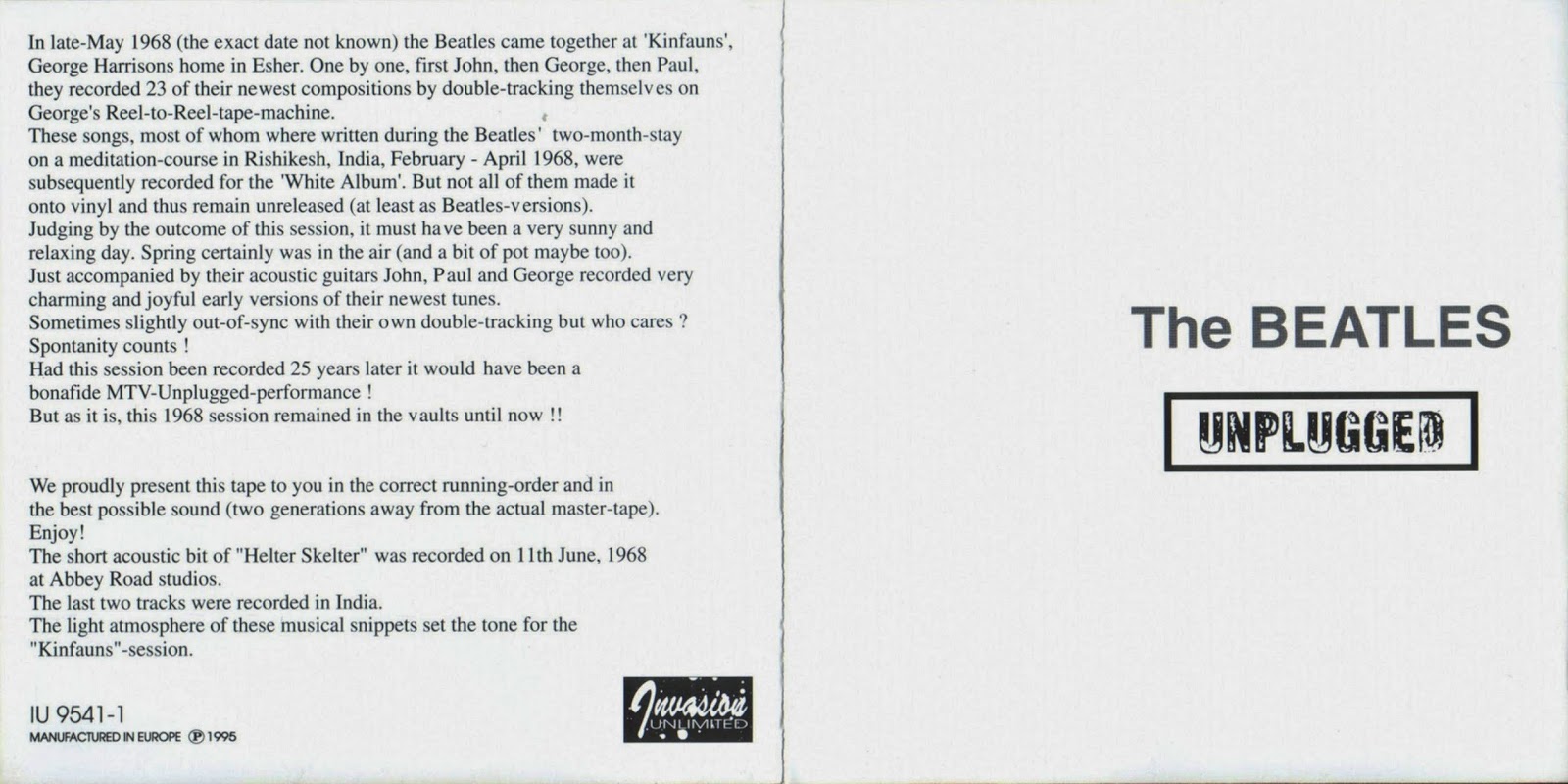 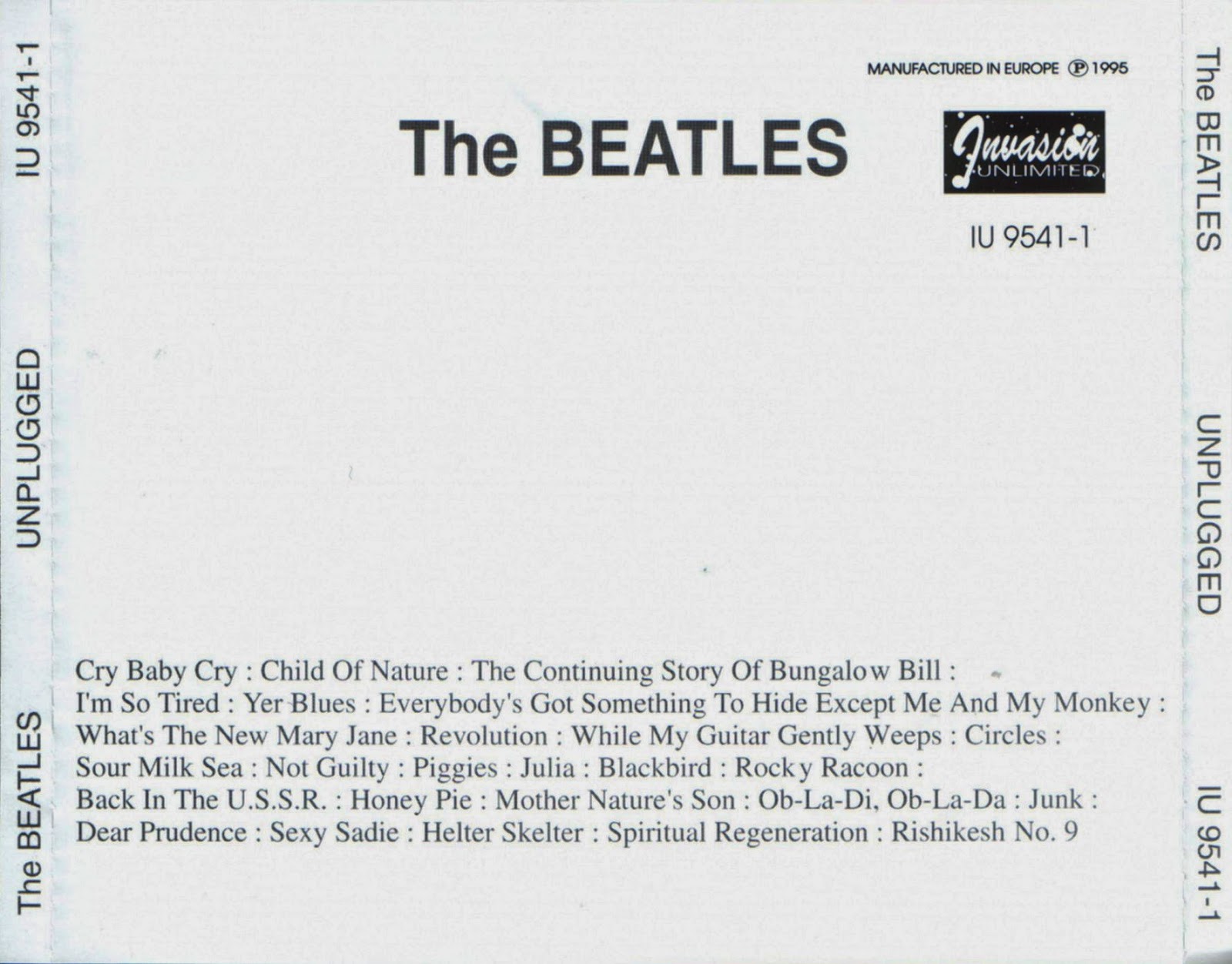 There has been news about the upcoming remastered White Album mentioned by Paul McCartney coming out in November. Below is a previous posting on the Alternate White Album released some time ago. Perhaps some of these alternate takes will appear on the remastered new release.

The sleeve says: No Anthology Tracks.Another in the series of Alternate albums, where a collection is put together based on the timing of the original released album. This particular C.D. collects together a lot of fine outtakes from the "White Album" era, including studio alternate takes, live performances and of course the Esher sessions. It also pulls together some of the official stereo or mono mixes that were less commonly found. Yes, I know we already have these pieces, but, nicely presented and nicely collected together makes it worth having them again.

I'm approaching The Alternate White Album with the attitude of the amateur who loves the White Album, and not with the attitude of the hard core Beatles fan who wants to get every possible alternate take that exists out there. I mostly wanted to hear some of the alternate versions and mono mixes that exist of these songs without shelling out a fortune for the original mono vinyl (yet).

The double CD set offers a run through the 31 songs of the original album in alternate takes, either from mono mixes, the 'Peter Sellers Tape' (a tape with early rough mixes of the songs, given as a gift to actor Peter Sellers by Ringo) and a few from the Esher sessions in spring 1968. These versions are not radically different (the possible exception being a wonderful acoustic version of "While My Guitar Gently Weeps"), but they add interesting little twists and turns here and there that have just the novelty value for me as a moderate Beatles fan to enjoy the material anew.

Added to this are 25 bonus tracks, home demos, out-takes and alternate takes of varying quality and interest that were recorded at the same time. There are no fantastic discoveries here, but tracks like George's "Sour Milk Sea" and "Not Guilty" deserve to be heard, John's "Everybody Had a Hard Year" sheds some light on "I've Got a Feeling" from Let It Be, and the prototype for his "Jealous Guy" (here under a different title) may surprise quite a few people, so it's not all just fluff.

The sound quality of this is fine, only the Esher sessions and home demos sound rather muffled. The package claims that the CDs contain "no Anthology tracks". I'm not entirely sure about one or two of them, but mostly this seems to be true.

As a mixture of released tracks (the mono mixes), demos, unreleased mixes and out-takes this can of course not reach the quality of the released White Album, and hard core fans will perhaps want a more comprehensive set of alternate versions from the White Album sessions, but this is useful enough to broaden the horizon for the average fan. Not one of the rip-off bootlegs, but actually pretty good stuff. http://rateyourmusic.com/release/unauth/the_beatles/the_alternate_white_album/ 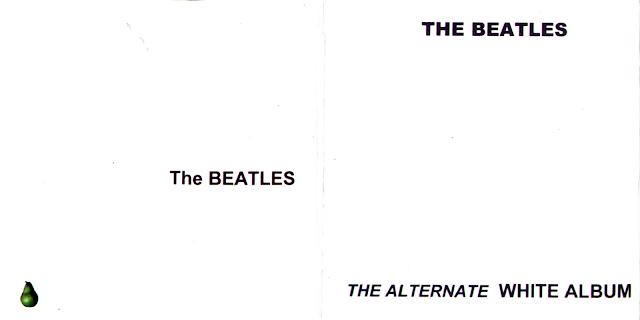 An Interesting and Informative McCartney Podcast

Just in the past week we’ve come across another Beatle-related podcast that we’d have no hesitation in recommending.

Take It Away – The Complete Paul McCartney Archive Podcast is produced by Ryan Brady and Chris Mercer, two fans (from Los Angeles and Chicago) who really know their stuff.
The aim is to examine in detail every single Paul McCartney release, from 1970 to the present day. Episode 0 is a brief introduction to what it is they want to achieve and what the show is all about. You can hear it on their website, or just have a listen here:

This podcast series not only contains a wealth of information, it has really high production values as well as the guys deftly mix in short extracts of the songs they’re knowledgeably deconstructing. These illustrative flourishes really bring alive the discussion and help you to hear exactly what it is they are talking about. They’ll often contrast and compare demo versions with the finished product and, where it will help, they’ll include short interview extracts with McCartney and other spoken word content.
Mercer and Brady are working their way through McCartney’s recorded output chronologically. They’re currently into Season 3, and up to 1993’s Off The Ground. Occasionally they’ll also feature an interview with key players in the McCartney solo story – like Laurence Juber and Denny Laine.
The Take It Away podcast. Very much worth checking out.

Source: https://beatlesblogger.com/2018/04/30/an-interesting-and-informative-mccartney-podcast/
Posted by PC, Music, & Movie Geek at 7:17 AM

It’s not every day that you walk into your local second-hand record store and find an almost mint copy of The Beatles’ 1967 EP Magical Mystery Tour, but that’s what happened last week.
Dropped into Audiomania in the Sydney suburb of Manly Vale and as we were quietly browsing the LP section we looked up to a shelf just near the “New Arrivals” bin, and this is what we spied:

This is a UK pressing, and we’re pretty sure it is an original from 1967, making it just over 50 years old. For it’s age this example is in exceptionally good condition, both the laminated gatefold sleeve, and the two EP records it contains.

This is the mono UK pressing. You can tell that from the catalogue number MMT-1 which is printed on the upper right of rear cover (and of course the word MONO is also there!). Stereo pressings have an SMMT catalogue number:

The labels also carry the MMT catalogue number. As you can see below this pressing came with a solid centre. There are also examples with a push-out centre. The labels have the “Sold in the U.K. subject to resale price conditions…” text:

Don’t know if you can see it, but the Side 1 label (on either side of the spindle hole) has two raised letters, a K and a T. Not sure if this is significant, or helps identify the pressing date. We think it has something to do with a tax code for the record.
The inner 24-page booklet is also in excellent condition:

It also comes with the 4-page blue lyric sheet pages still intact in the centre. This also helps identify it as being an original pressing. The paper sleeves holding the records are white though, and have a wave-cut top. I think originally the discs may have come in black paper sleeves? If anyone knows please contact us, or leave a comment.

(As usual, click on the images to see larger versions)
So, this was too good an item to pass over. We have Australian mono and stereo pressings of the Magical Mystery Tour double EP, plus a nice French pressing (with a story attached), but a UK pressing in almost pristine condition was our find of the month.
The really sad news is that the Audiomania store will soon be no more. The owner let us know that they will be closing their doors because the site in which they operate has been purchased and its buildings demolished. All the tenants have to get out. They hope to continue online, but it’s just not the same as being there to flip through record bins of used LPs and singles in person…..