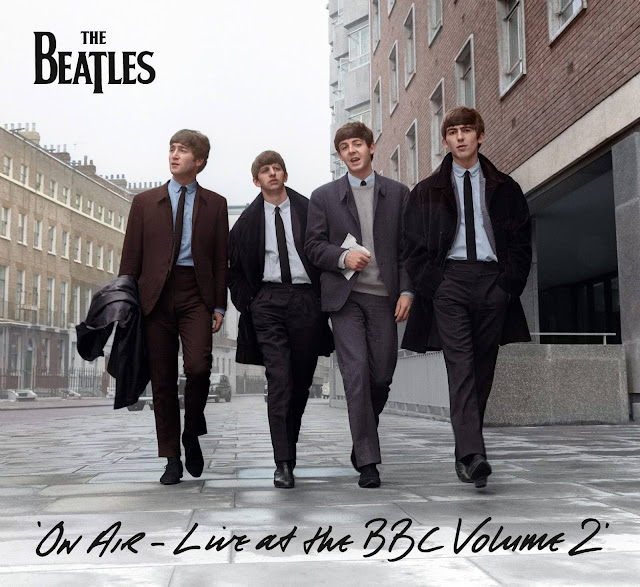 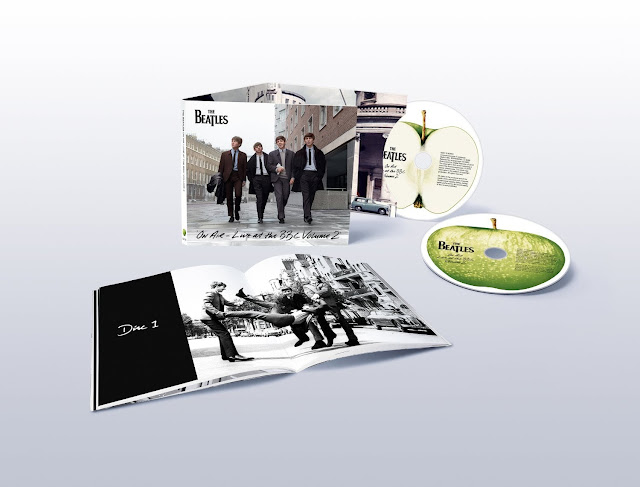 The 2-CD set features 63 tracks, with 40 new performances, not heard on the first Live At The BBC collection. It will be released on November 11th, and is available on Amazon now here:

London – September 12, 2013 - In 1994, The Beatles’ Live at the BBC was released to worldwide acclaim - hitting number one in the U.K., number three in the U.S. and selling more than five million copies within six weeks. A new companion to The Beatles’ first BBC collection, On Air – Live at the BBC Volume 2, will be released Monday, November 11 in 2CD and 180-gram vinyl packages with a 48-page booklet. On Air’s 63 tracks, none of which overlaps with The Beatles’ first BBC release, include 37 previously unreleased performances and 23 previously unreleased recordings of in-studio banter and conversation between the band’s members and their BBC radio hosts.


In the studios of the British Broadcasting Corporation, The Beatles performed music for a variety of radio shows. On Air - Live at the BBC Volume 2 presents the sound of The Beatles seizing their moment to play for the nation. Thrilled to hear these exciting recordings again, Paul McCartney said, “There’s a lot of energy and spirit. We are going for it, not holding back at all, trying to put in the best performance of our lifetimes.”


Ten of On Air’s songs were never recorded by the group for EMI in the 1960s, including two making their debuts with the new release: The Beatles’ direct-to-air performance of Chuck Berry’s “I’m Talking About You” and a rocking cover of the standard “Beautiful Dreamer.” On Air also includes different versions of six rarities heard on the 1994 BBC collection: Little Richard’s “Lucille,” Chuck Berry’s “Memphis, Tennessee,” Chan Romero’s “The Hippy Hippy Shake,” Ray Charles’ “I Got A Woman,” and two songs they learned from records by Carl Perkins, “Glad All Over” and “Sure To Fall.”


The Beatles’ tribute to the BBC’s most important pop show of the early ’60s – “Happy Birthday, Dear Saturday Club” – is another surprise. As John Lennon recalled in 1980, “We did a lot of tracks that were never on record for Saturday Club – they were well recorded, too.” Paul remembers, “We’d been raised on the BBC radio programs. One of the big things in our week was Saturday Club – this great show was playing the kind of music we loved, so that was something we really aspired to.”


Between March 1962 and June 1965, no fewer than 275 unique musical performances by The Beatles were broadcast by the BBC in the U.K. The group played songs on 39 radio shows in 1963 alone. Ringo Starr said in 1994, “You tend to forget that we were a working band. It’s that mono sound. There were usually no overdubs. We were in at the count-in and that was it. I get excited listening to them.” On their busiest BBC day, July 16, 1963, The Beatles recorded 18 songs for three editions of their Pop Go The Beatles series in fewer than seven hours.


The group played 88 distinct songs in their BBC sessions – some were recorded many times; others performed just once. At the time, three national BBC stations provided all daytime radio broadcasting in the U.K. Only the Light Programme network might occasionally play a record. Most broadcast music was live music. Consequently, to promote their releases, The Beatles had to play live at the BBC. “Everything was done instantly,” remembered George Harrison, “But before that, we used to drive 200 miles in an old van down the M1, come into London, try and find the BBC and then set up and do the program. Then we’d probably drive back to Newcastle for a gig in the evening!”


On Air also features BBC recordings of 30 well-loved songs from The Beatles’ catalogue, including five number on¬es and other favorites such as: “I Saw Her Standing There,” “Twist And Shout,” “Do You Want To Know A Secret,” “Boys,” “Please Mister Postman,” “Money,” “And I Love Her,” and “If I Fell.”


Like its critically acclaimed predecessor, On Air - Live at the BBC Volume 2 includes audio of The Beatles talking to DJs Brian Matthew and Alan Freeman and Pop Go The Beatles hosts Lee Peters and Rodney Burke. When first broadcast, pop fans were amazed to hear such witty irreverence on the rather formal BBC and it is great fun to hear these extracts now. In addition, On Air releases, for the first time, the group’s candid interviews for the Pop Profile series recorded in November 1965 and May 1966.


Newly remastered for reissue on November 11, The Beatles’ first Live at the BBC album sounds and looks better than ever. This collection of the group’s BBC sessions mixed versions of their hits with a treasure trove of 30 songs The Beatles performed on air but never released on record in the 1960s. The compelling track list ranged from a rare performance of the little known Lennon-McCartney original “I’ll Be On My Way” to covers of classic rock ’n’ roll and contemporary rhythm and blues songs. At the time of its release, Live at the BBC was hailed by Rolling Stone as “an exhilarating portrait of a band in the process of shaping its own voice and vision.” It earned a GRAMMY® Award nomination for Best Historical Album.


Live at the BBC was assembled by George Martin in 1994 and On Air - Live at the BBC Volume Two was compiled and researched by producers Kevin Howlett and Mike Heatley. Both albums have been meticulously mastered by engineers Guy Massey and Alex Wharton at Abbey Road Studios. The booklets for both collections include Kevin Howlett’s essays on the history of The Beatles’ BBC radio sessions and his detailed commentaries on all of the tracks.


www.thebeatles.com
The Beatles: On Air – Live at the BBC Volume 2


Update: Now scheduled for November 2013.
In November 1994 Apple Records made a celebrated triumphant return after not having a release since Ringo Starr’s hits compilation LP Blast From Your Past 19 years earlier. The comeback was initiated with Live At The BBC – a 2-CD collection of Beatles BBC radio performances recorded between 1963 and 1965. Since then they’ve brought us everything from The Beatles Anthologies, Yellow Submarine Songtrack, the One collection, a “naked version of the Let It Be LP, the Love mashups, an entire remastering of the complete Beatles catalog on CD and vinyl and even restored versions of most of The Beatles films. Now that Apple has gone full circle, it is releasing a second collection of BBC radio recordings by The Beatles called Live At The BBC Volume 2 that promises to be every bit as entertaining as the first.

Although the first Live At The BBC didn’t use any of the earliest Beatles BBC recordings from 1962, they actually go all the way back to March of that year. With nearly 270 recordings made between then and May of 1965, this adds up to around 9 and a half hours of music in all. Only 56 of these tracks appeared on Apple’s first BBC collection (click here for a track listing). In addition to that set only four other tracks have been released officially. They are “Lend Me Your Comb” on The Beatles Anthology 1 CD set and three B-sides to a 1995 CD single of “Baby It’s You” – “Boys,” “Devil In Her Heart” and “I’ll Follow The Sun” (I’m not counting “Baby It’s You” itself since it also appeared on Live At The BBC). Other BBC recordings by The Beatles have only been available in the bootleg market.
As with Apples’ first BBC collection, this set will include a few bits of humorous chat sessions between The Beatles and the likes of the BBC radio personalities of the day such as Brian Matthew and Alan Freeman. The new set was reported earlier to be planned for release during the first week of October 2013 but the latest is that it will be out in November. Stay tuned!

In a separate article:

Hard as it might be to believe, apparently there are still enough unreleased Beatles recordings to fill yet another compilation.

Multiple sources are reporting that Apple has set Oct. 3 as the release date for ‘Live at the BBC, Vol. 2,’ which arrives nearly 20 years after ‘Vol. 1.’ And like its predecessor, it compiles live performances that the Fab Four delivered within the walls of the U.K. radio giant’s studios.

The first volume, released in 1994, filled two CDs with 69 songs from appearances the band made between 1962-65. It’s unknown at this time how many tracks or discs ‘Vol. 2′ will boast, but it will focus on performances previously thought to be lost due to the BBC’s policy of erasing and reusing tapes after shows.

Between listeners who recorded the shows at home and syndicated stations that aired the broadcasts in other markets, Apple has apparently compiled enough rarities to round out a new album. The new volume may include some of the bonus tracks issued as B-sides on the ‘Baby It’s You’ single from ‘Vol. 1′ (‘I’ll Follow The Sun,’ ‘Devil In Her Heart’ and ‘Boys’)

Another Set of Beatles’ BBC Recordings Is on the Way-NYTimes 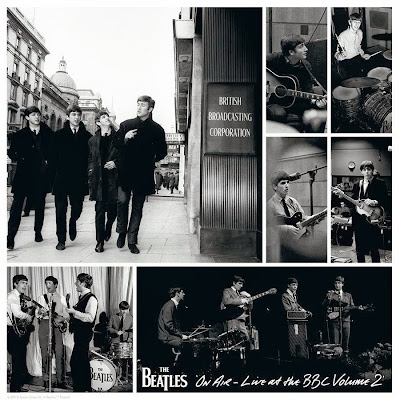 By ALLAN KOZINN
When Capitol Records released “The Beatles Live at the BBC” to great fanfare in 1994, Beatles collectors lamented that the two-disc set barely scratched the surface of the vast trove of recordings the band made for the BBC between March 1962 and June 1965. Many of those radio recordings were already on a 10-disc bootleg set, after all, and in the 19 years since then, bootleggers have come up with another three discs’ worth of material.

But Capitol and Apple, the Beatles’ own label, are determined to catch up. “On Air – Live at the BBC Volume 2,” another two discs, will be released Nov. 11. It will include 63 tracks, including 40 songs and 23 spoken segments, with interviews, introductions and studio banter. A remastered version of the 1994 set will be released at the same time.

The new set redresses some of the complaints about the original. It had seemed odd, for example, that the Beatles’ radio performances of some of their biggest hits, including “Please Please Me,” “She Loves You” and “I Want to Hold Your Hand,” were left off the first set. All three are included here, as are “This Boy,” “Words of Love” and “And I Love Her,” which the earlier set also skipped.

The new set also includes several songs new to the Beatles official discography, including a rocked-up version of Stephen Foster’s “Beautiful Dreamer,” Paul McCartney’s energetic rendering of Little Richard’s “Lucille,” and John Lennon’s biting account of Chuck Berry’s “I’m Talking About You.”  Included, too, is the Beatles version of “Happy Birthday,” recorded to celebrate the anniversary of Saturday Club, one of the shows they performed on.

Three of the tracks have been released previously, including a cover of a Carl Perkins track, “Lend Me Your Comb,” which appeared on the first volume of “The Beatles Anthology.” There is no crossover between the 1994 set and the new album, but several songs from the earlier collection – including “I Saw Her Standing There,” “I Got A Woman,” “Sure To Fall” and “Hippy Hippy Shake” – are heard here in different performances.

All told, the Beatles performed 88 songs on the BBC, most in multiple performances. Among them were 36 songs they never recorded at Abbey Road. Equally significant, though, is the way the BBC recordings were made. Essentially, they were live performances, sometimes with minimal vocal overdubbing. They represent the group’s concert style, which had an edge that their polished studio productions sometimes lacked – but although a few of the BBC recordings were made before live audiences, most were not, and are therefore free of the hysterical shrieking typically heard on even the most professionally recorded Beatles concert tapes.

Among the interviews are individual talks with each Beatle recorded for the Beeb’s Pop Profile program in November 1965 and May 1966. The sets will have notes by Kevin Howlett, a former BBC producer whose 1996 book, “The Beatles at the BBC – The Radio Years 1962-70,” is being republished in a substantially expanded and reconfigured edition as “The Beatles – The BBC Archives 1962-1970,” by Harper Design, in November.