Listen to the Beatles Christmas Messages: 7 Vintage Recordings for Their Fans: 1963-1969

1963:
Every year from 1963 to 1969, the Beatles recorded a special Christmas greeting to their fans. It started when “Beatlemania” took off and the band found itself unable to answer all the fan mail.  “I’d love to reply personally to everyone,” says Lennon in the 1963 message, “but I just haven’t enough pens.” The first message was intended to make their most loyal fans feel appreciated. Like those that followed, the 1963 message was mailed as a paper-thin vinyl “flexi disc” to members of the Beatles fan club. The recording features the Beatles’ trademark wit and whimsy, with a chorus of “Rudolph the Red-Nosed Ringo” and a version of “Good King Wenceslas” that refers to Betty Grable. It was made on October 17, 1963 at Abbey Road Studios, just after the band recorded “I Want to Hold Your Hand.”

1964:
The band recorded their next holiday greeting, Another Beatles Christmas Record, on October 26, 1964, the same day they recorded the song “Honey Don’t.” Lennon’s rebellious nature begins to show, as he pokes fun at the prepared script: “It’s somebody’s bad hand wroter.”

1965:
Recorded on November 8, 1965 during the Rubber Soul sessions at Abbey Road, the 1965 message features a re-working of “Yesterday,” with the refrain “Oh I believe on Christmas Day.” The band’s gift for free-associational role playing is becoming more apparent. One piece of dialogue near the end was eventually re-used by producer George Martin and his son Giles at the end of the re-mixed version of “All You Need is Love” on the 2006 album Love: “All right put the lights off. This is Johnny Rhythm saying good night to you all and God Blesses.”


1966:
You can sense the band’s creative powers growing in the 1966 message, Pantomime: Everywhere It’s Christmas. The recording was made at Abbey Road on November 25, 1966, during a break from working on “Strawberry Fields Forever.” The Beatles were just beginning work on Sgt. Pepper’s Lonely Heart’s Club Band. Instead of simply thanking their fans and recounting the events of the year, the Beatles use sound effects and dialogue to create a vaudeville play based around a song that goes, “Everywhere it’s Christmas, at the end of every year.” Paul McCartney designed the cover.


1967:
This was the last Christmas message recorded by the Beatles all together in one place. Titled Christmas Time (Is Here Again), it reveals the group’s continuing experimentation with sound effects and storytelling. The scenario, written by the band earlier on the day it was recorded (November 28, 1967), is about a group of people auditioning for a BBC radio play. Lennon and Ringo Starr designed the cover.

1968:
By the Christmas season of 1968, relations within the Beatles were becoming strained. The holiday message was produced around the time the “White Album” was released, in November of 1968. The four members’ voices were recorded separately, in various locations. There’s plenty of self-mockery. Perhaps the most striking moment comes when the American singer Tiny Tim (invited by George Harrison) strums a ukulele and sings “Nowhere Man” in a high falsetto.

1969:
The Beatles were in the process of breaking up when they recorded (separately) their final Christmas message in November and December of 1969. A couple of months earlier, just before the release of Abbey Road, Lennon had announced to the others that he was leaving the group. Yoko Ono appears prominently on the recording, singing and talking with Lennon about peace. Fittingly, the 1969 message incorporates a snippet from the Abbey Road recording of “The End.”

This post was written by Open Culture contributor Mike Springer.

Another Source to find the Beatles Christmas Messages:

For this year, if you would like to listen to a full hour of Beatles Christmas Messages, you can stream them all in great fidelity at the below link. These are the messages that are here:

From John, Happy Christmas War Is Over, and
From Paul, Wonderful Christmas Time... Enjoy

Each year the Beatles would send a studio message thanking all their fan club members for a wonderful year. Below are the covers for each year from 1963 thru 1969 and a link where you can get them. Enjoy http://returntopepperland.blogspot.com/2006/11/beatles-christmas-records.html 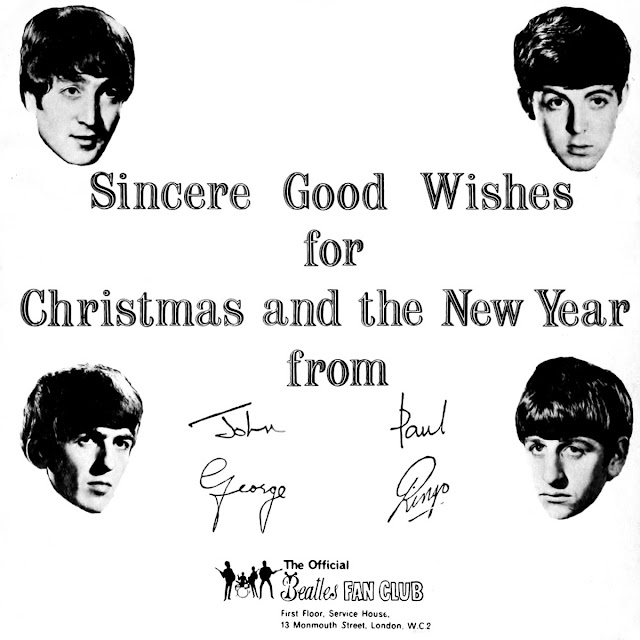 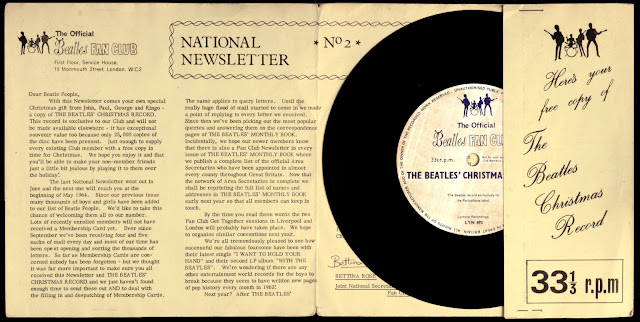 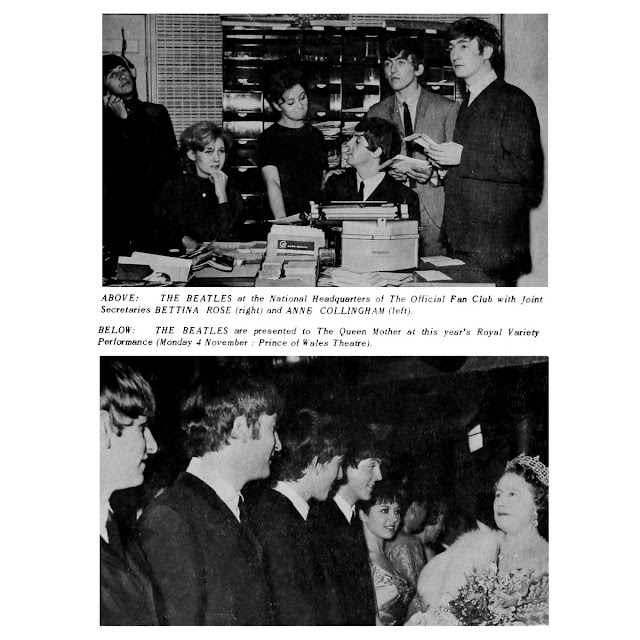 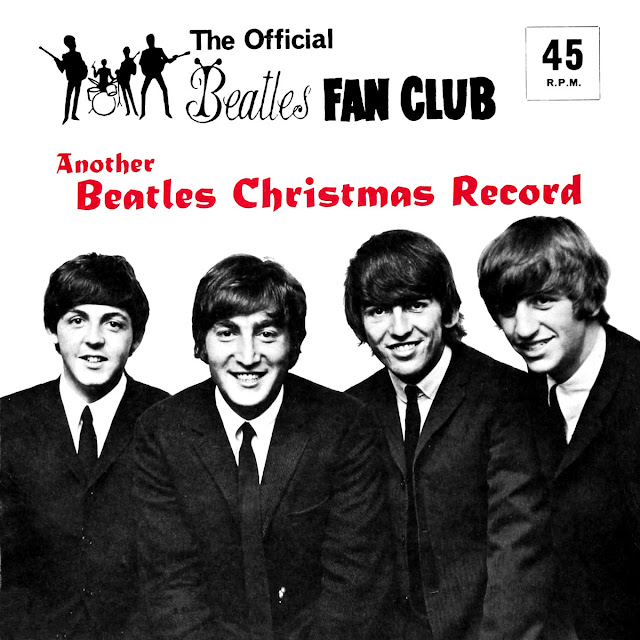 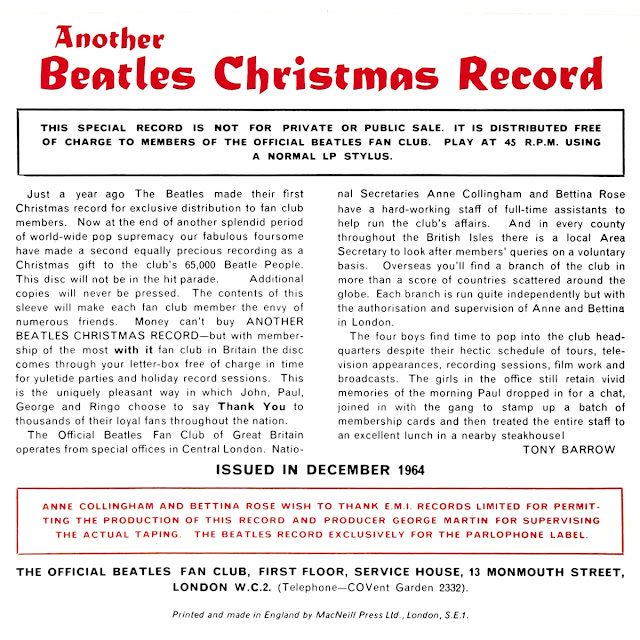 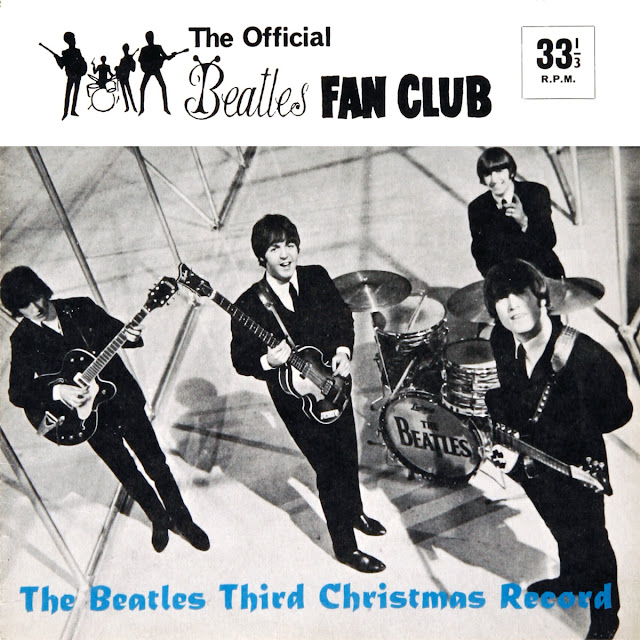 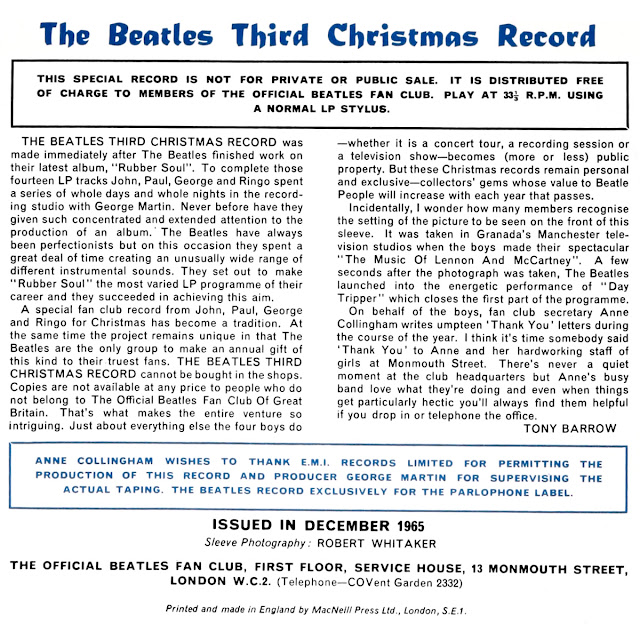 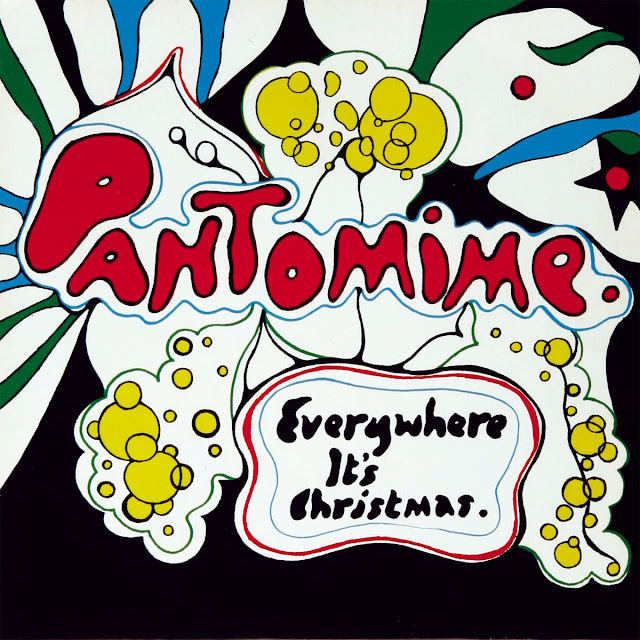 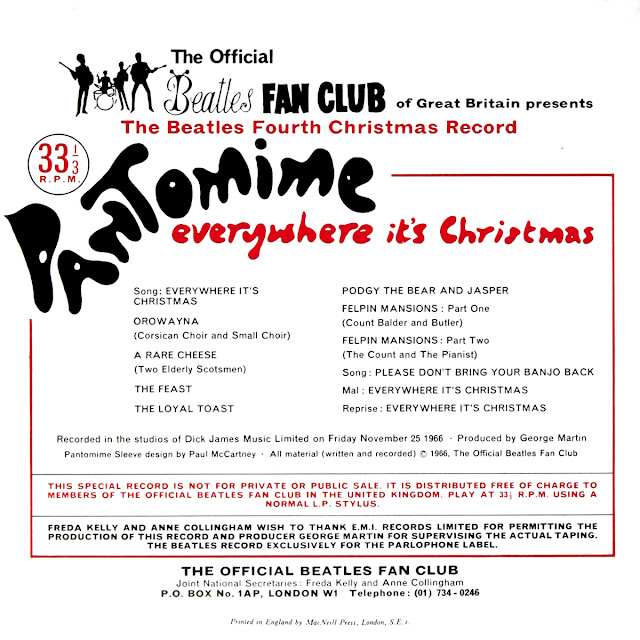 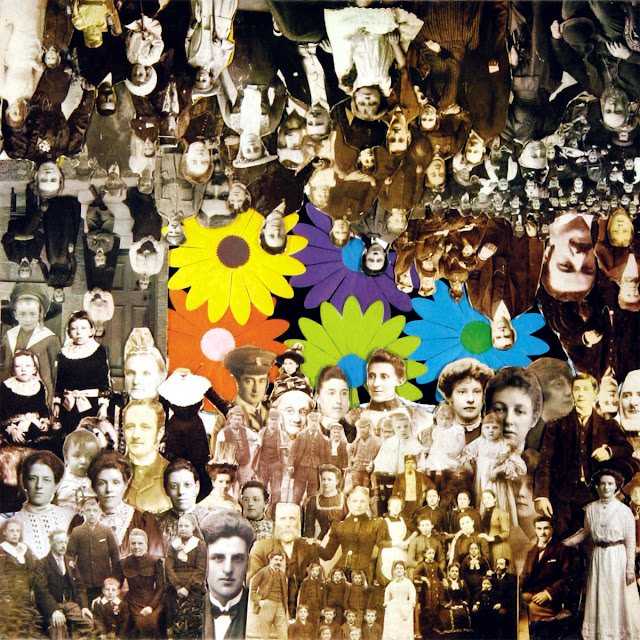 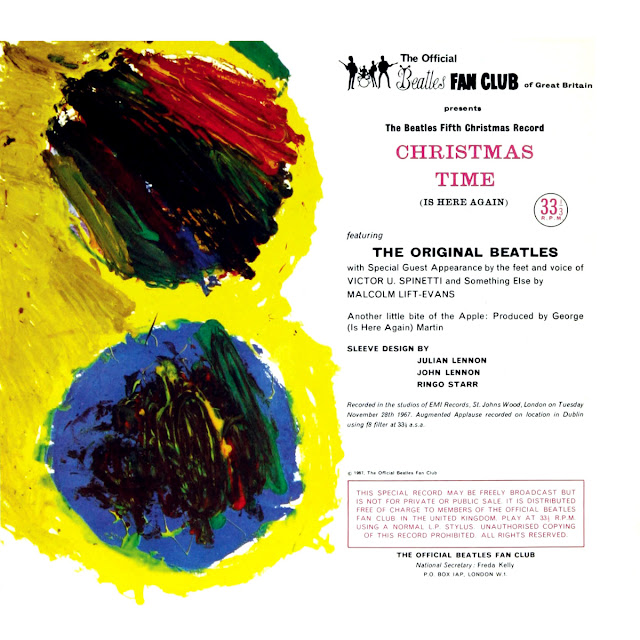 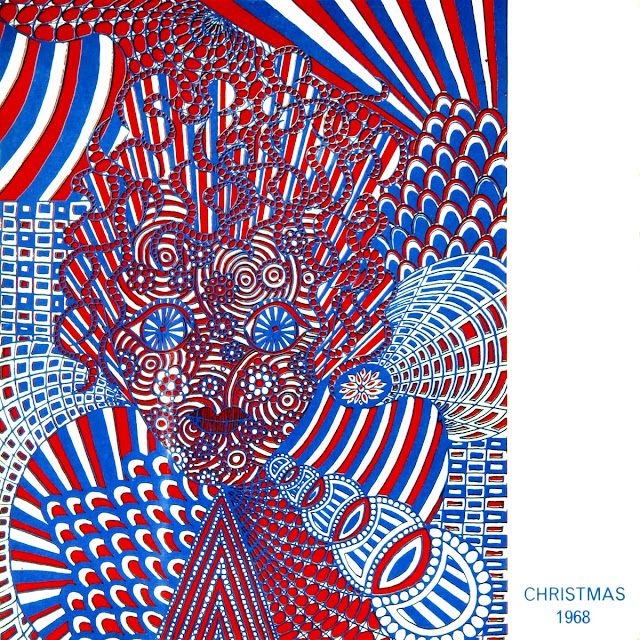 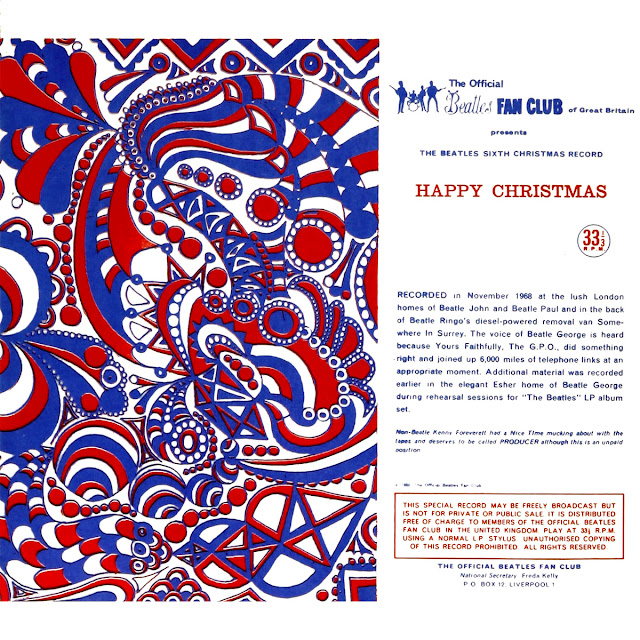 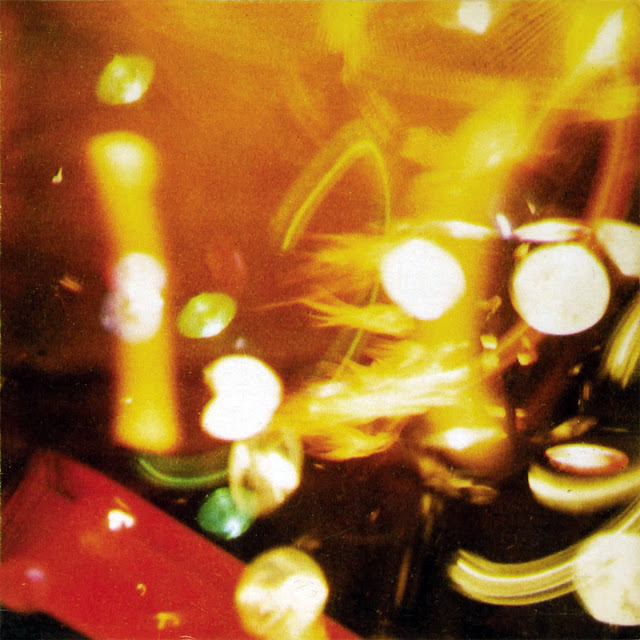 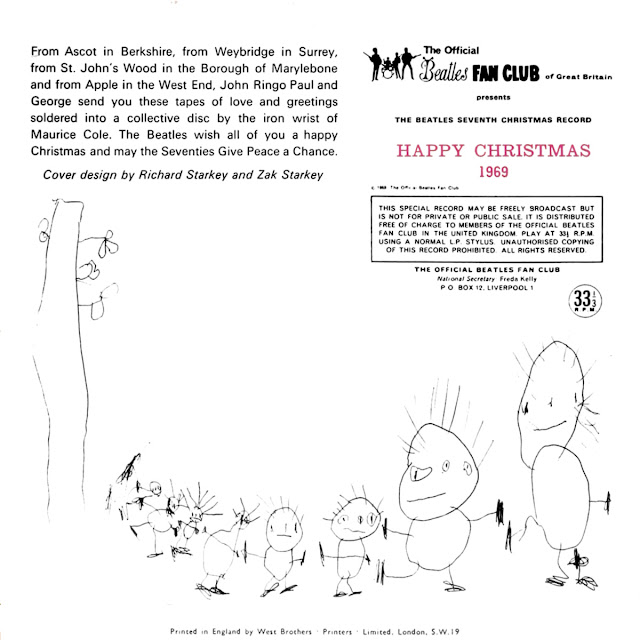