Overview: First appearing in 1990, Yellow Dog’s CD series “Unsurpassed Masters” was manna for Beatles collectors old, new & future. Near master tape quality & sounding much, much better than the Parlophone / Capitol official CDs on the market & one of the best places to hear ( at the time ) officially unreleased tracks for the Beatles cannon. Allegedly correlated from tapes once owned by British DJ Roger Scott from EMI tape archivist Roger Barrett & firstly partly bootlegged by Swingin’ Pig Records from Germany, Yellow Dog, another European label & one that had been producing high quality vinyl Beatlegs for a number of years, managed to serve up a glut of tapes & joined the CD revolution. Where as many earlier Beatlegs were BBC sessions marketed as the same or, shorn of their chatter & interviews, released as “Unreleased Studio Sessions” these were the real things. The initial issue of his CD was fraught with problems – released in the U.S. on two different labels ( possibly to deflect customs from picking up on a lead on one particular label ) as Yellow Dog on the East Coast & Sphinx in the West, the CDs were mastered with one channel wiped out so while the tracks could be heard through both speakers then, for instance, the vocal track may have been eliminated but the musical track would be heard intact but in mono making these expensive karaoke disks at best ( a theme Yellow Dog would later come back to on their Beatles & Rolling Stones “Karaoke” CD which may have been one of their worst ideas but when dealing with a Beatles market money is king & anything should have been tried once .. ) this was later rectified & the CDs were re – issued in full, dynamic stereo again in their pseudonyms over each coast. A collection of various studio takes comprising edit pieces, different tracks & remakes from the original versions.

While once it may have been the top of it’s field then many more upgrades have come along & surpassed this ‘Unsurpassed Master’ but i intend this review to be a track by track analysis of this classic bootleg & one that paved the way for the bulk of the better Beatlegs that can be found today. Source: https://classicrockreview.wordpress.com/category/the-beatles-unsurpassed-masters-vol-1/

Wiki: In 1981, in-house engineer John Barrett was given the task of cataloguing the complete collection of tapes from the band's seven-year career with EMI. This led to two projects: a public audio-visual presentation at Abbey Road Studios called The Beatles Live at Abbey Road (which opened on 18 July 1983) and a planned outtakes album which was to be called Sessions. In addition to some of the songs included on the previously leaked compilation tape, Sessions added "Not Guilty", "What's the New Mary Jane", "How Do You Do It?", "Bésame Mucho", "Mailman, Bring Me No More Blues", "While My Guitar Gently Weeps" (demo), and early takes of "Ob-La-Di, Ob-La-Da" and "I'm Looking Through You".[34] Shortly before the album's scheduled 1985 release, it was vetoed by the surviving members of the band; but both audience recordings of the Abbey Road presentation and the leaked promos of Sessions became available to bootleggers. These songs appeared on bootleg series such as Ultra-Rare Trax and Unsurpassed Masters, along with other material presumably copied while preparing these projects. Most of the aforementioned tracks were officially released on the Anthology albums in 1995 and 1996. 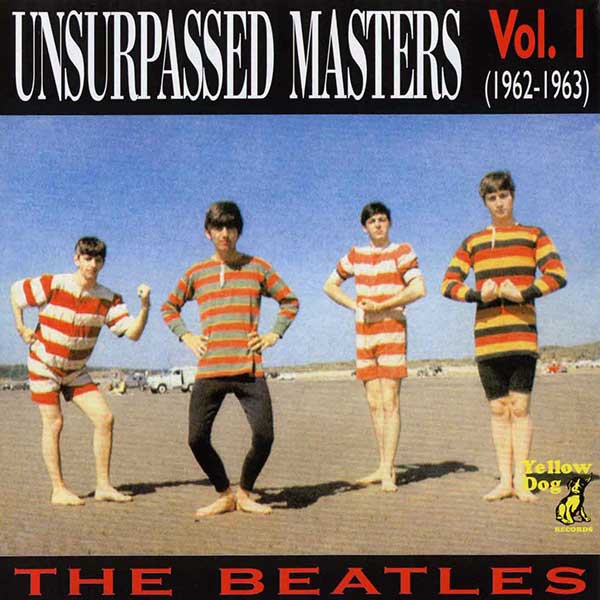 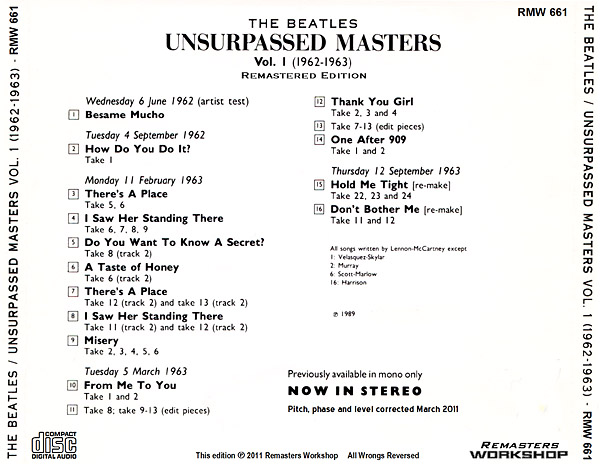 The first in the most recognized series of Beatles bootlegs ever, Unsurpassed Masters vol. 1 was mastered incorrectly in its first run and the stereo and cues were wrong. Tracks are from 1962-1963 recording sessions. 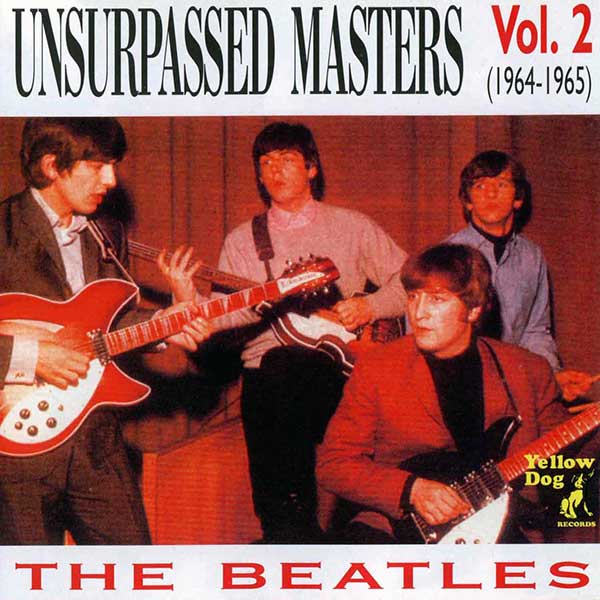 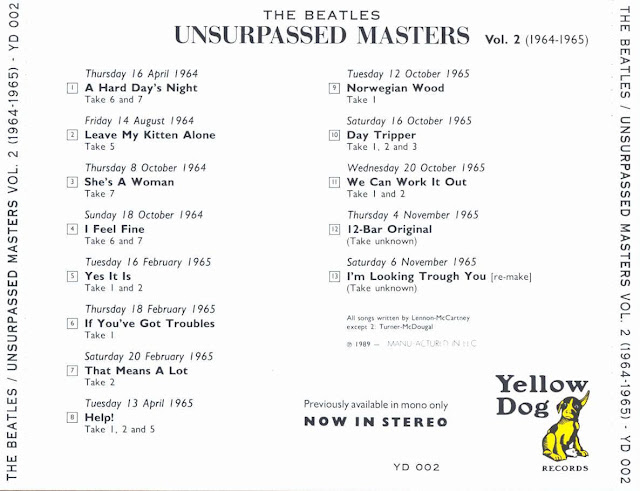 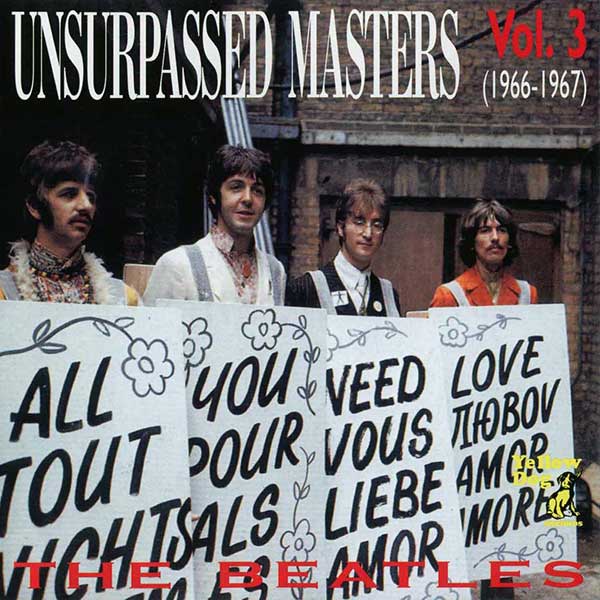 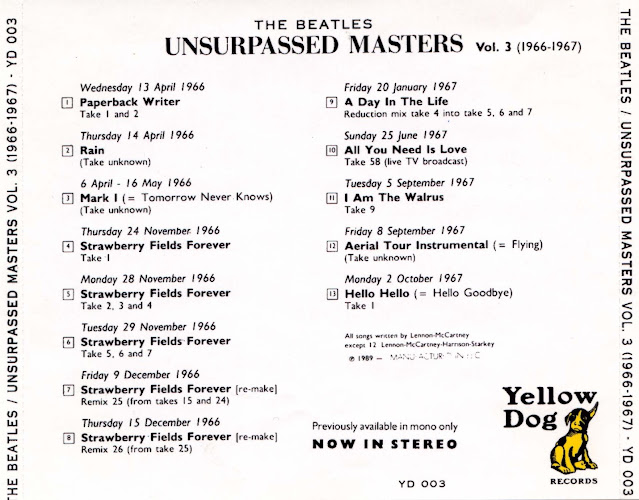 Featuring a cover photo from the ‘Our World’ broadcast, Vol. 3 features demos, outtakes, and rarities from 1966 and 1967. 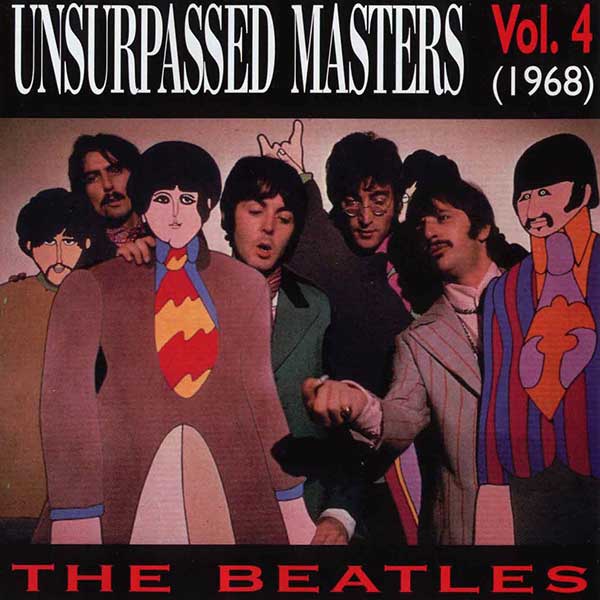 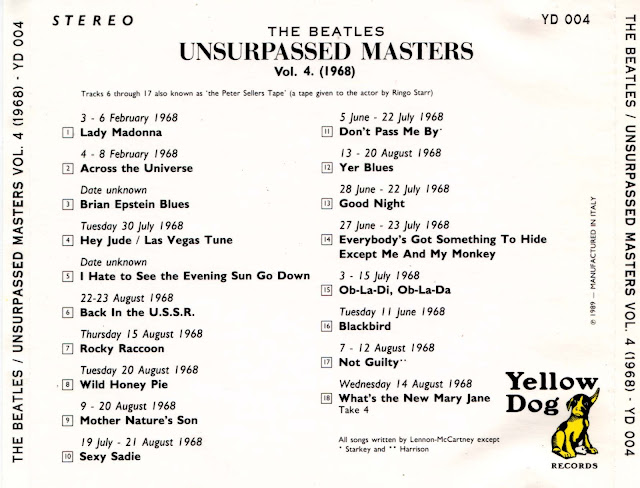 Focuses on recordings from 1968, encompassing demos, outtakes, and unreleased versions and entire songs recorded during the White Album sessions as well as versions of several successful singles. 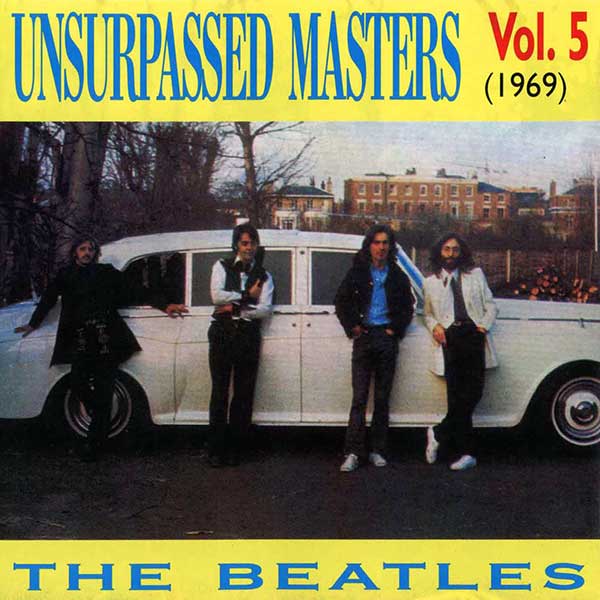 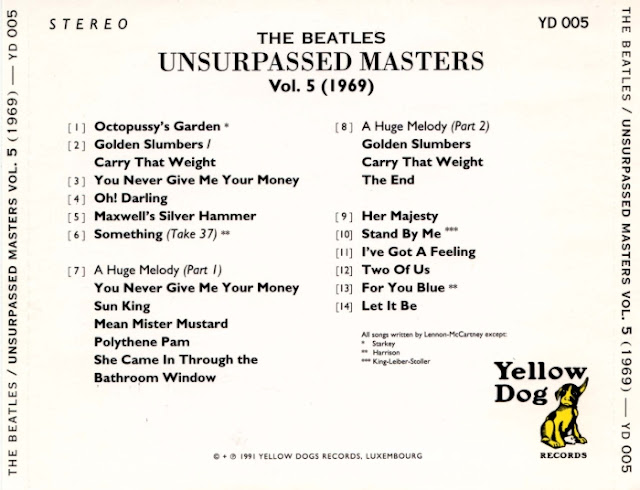 Vol. 5 features some supurb Abbey Road and Let It Be outtakes from 1969. 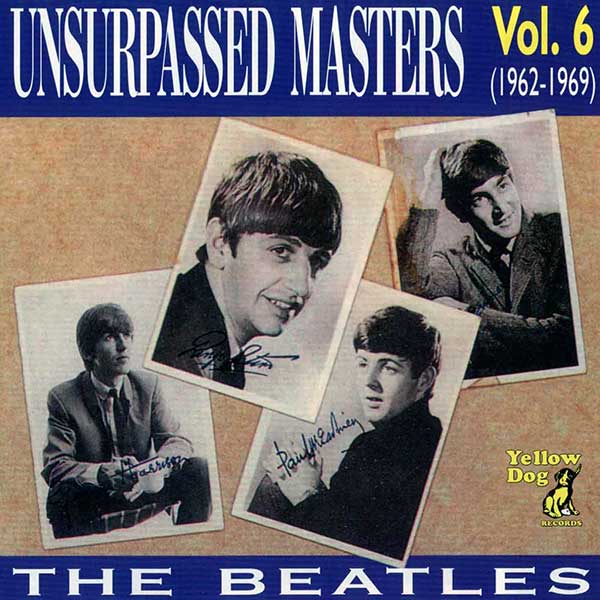 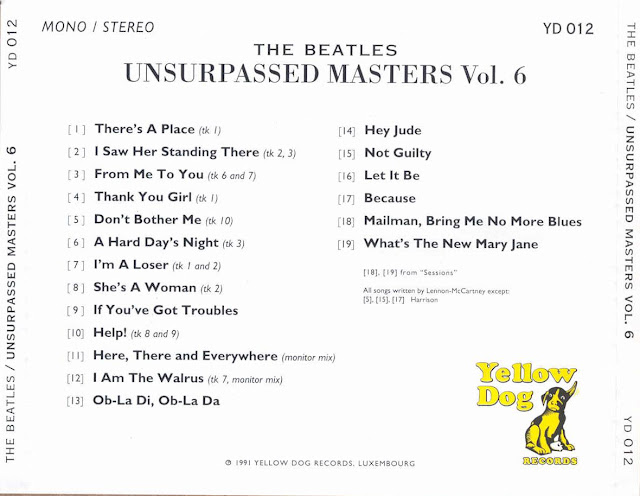 More alternate takes, mixes, and demos from 1962-1970, some of which were originally mixed for the ill-fated Sessions project. 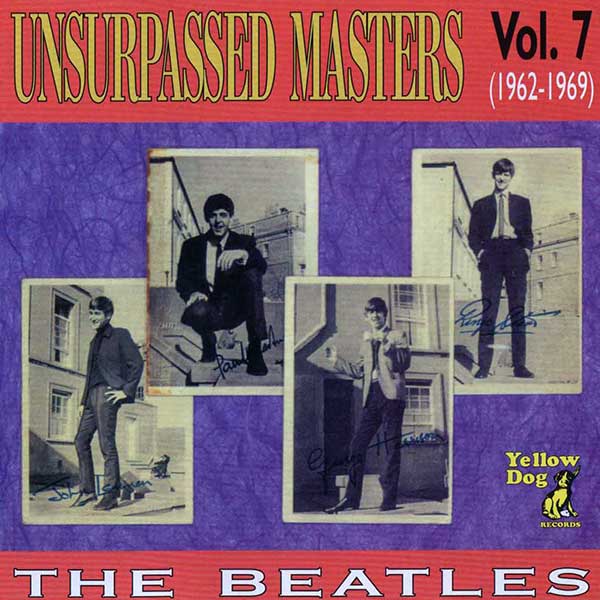 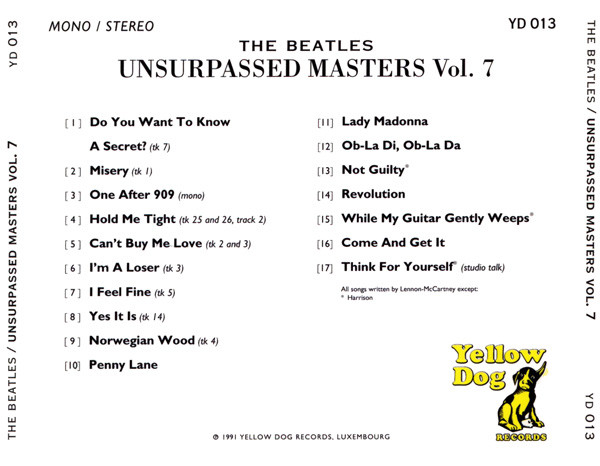 On The Records- Beatles Recordings

Let It Be Beatles Blog